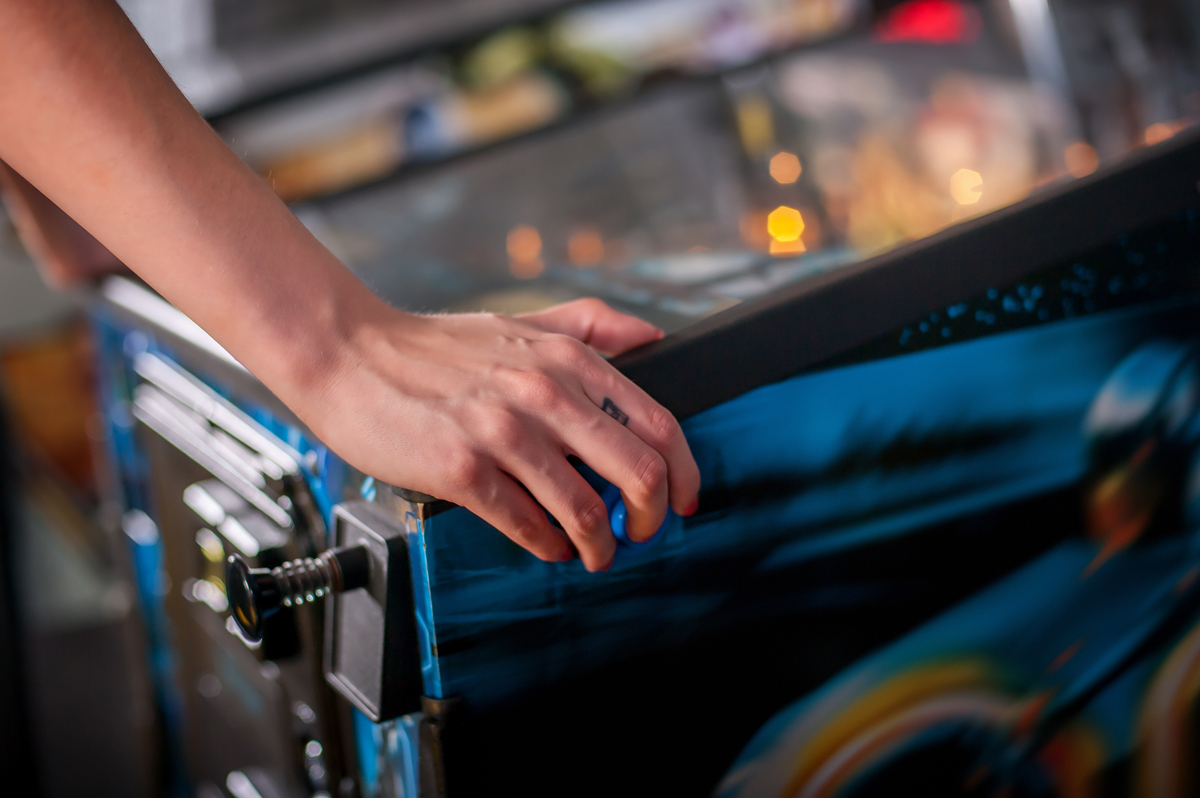 I bet that when someone mentions the term ‘arcade cabinet’, all everyone thinks about are the big fridge-shaped machines that take up a ton of space. They might also think about the machines using old, dated hardware, and yet manage to provide some of the most memorable experiences of our childhoods. Video arcade games have been produced since the early 70s, with electro-mechanical machines being created with interesting variety during the decades prior. With the arrival of Galaxy Game in 1971, the commercially successful Pong in 1972, and the plethora of games that ensued due to their success, the shape and style of arcade cabinets typically followed the pattern of what the most recent popular game had established. Some odd experiments came out of cabinet designs in the 70s but for the most part, the typical game you might come across was the classic upright cabinet format.

The golden age of gaming in the 80’s saw many innovations hit the scene along with the formats that they come in. Home console gaming became a widespread phenomenon in the 70s  thanks to companies like Magnavox with their Odyssey, and Atari, with their VCS 2600. The latter became the first video game product to sell in the millions, vaunting Atari to legendary status that led to people saying “I’m going to play Atari” instead of “I’m going to play video games”. What made home console gaming popular however wasn’t so much the name as the games. The Atari 2600 didn’t truly catch on fire until it “brought the arcade home” with a widely praised port of Taito’s Space Invaders. True – the arcade experience was superior in graphics & sound, also being able to set itself apart thanks to the ability to produce unique control schemes for each and every game. It also had a social angle attached to it that home console gaming could never touch. But for the next two decades, every home console would use arcade ports as a selling point to try and get people to buy into the machine. No, it wasn’t as cool as getting a full sized arcade machine in your house but it did give the product appeal as it tried to replicate what could be done with an arcade cabinet.

Times have changed and while modern consoles only tout arcade classics on their platforms, arcade machines are still being made and are done so in a variety of styles.

In this article, we aim to list the types of arcade cabinets currently in existence. Keep in mind that we won’t be mentioning merchandise games such as crane games, or mechanical amusements such as basketball courts, and skeeball, among others. Instead, we’ll be focusing on the most prominent cabinet styles that video arcade machines have assumed over the years:

The one. The only. The classic video arcade machine cabinets we all know and love. This is, by far, the most common type of arcade machine in the United States and most of the Americas. As their name suggests, these cabinets stand tall at around six feet and require the player to stand at them to play. The monitor of the game is embedded within the cabinet itself, and the controls are slightly below, at around waist level. The coin slot is just below the controls, and above the monitor, we can usually find the backlit marquee, which frequently overhangs it. In terms of controls, we can commonly find one or two joysticks, depending on the game, alongside several buttons for the different actions that the player can perform. Common variants may feature a trackball instead of a joystick, knobs that control horizontal movement in games like Arkanoid or Pong, or rubber pads which act as buttons in order to secure their longevity when used for fast-paced competitive games like Street Fighter and Mortal Kombat. Though somewhat uncommon, some upright driving games may feature a steering wheel and a lever instead of joysticks and buttons.

Though commonly meant to house single or two-player games, some upright cabinets can be as big as to accommodate four-player games such as Gauntlet.

This type of cabinet was highly popular in the late 70s/early 80’s and is rectangular in shape. Cocktail cabinets often hang low atop two pairs of short legs, much like a coffee table. They are meant to be played while sitting on stools, and often feature games where two players can sit on each side and compete against each other or take turns beating the computer. The monitor can switch orientation to comfortably alternate between players, a feature which is usually controlled via a dip switch. Although the cocktail versions of games were usually released alongside their upright counterparts, the former were popular due to their compact sizes and unobtrusive nature, which allowed them to be set in many spaces, particularly restaurants.

Cocktail cabinets are released every once in a while in the modern industry, such as Pac-Man Battle Royale. But it is still uncommon compared to the likes of upright and Environmental cabinets.

Self-explanatory, these are cabinets that come with their own seat for the player to use while they play. Generally speaking, a racing game will be a sit-down cabinet, as will cockpit and environmental designs.

Currently one of the most popular designs found in the business, environmental cabinets provide more of a simulator feel to a game experience than your typical arcade machine. A variation of the sit-down cabinet, players sit inside of the game, similar to what cockpit cabinets do by having a roof and something to their backs. These games tend to have much higher earnings than alternative designs as they help elevate a game to offer an experience that you just can’t replicate at home. They block out some sounds from the surrounding arcade and increase the immersion of the software in question. Sometimes called Theater cabinets; certain designs like Luigi’s Mansion Arcade will come with drapes to help block out additional lights & sounds from the outside. 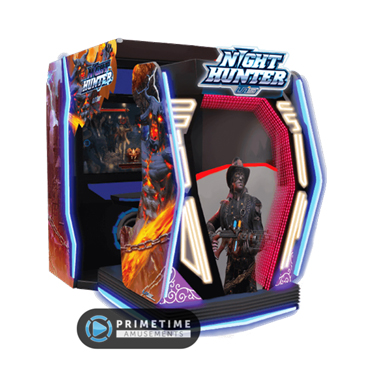 This modern design grew out of the availability of flat panel LCD monitors coupled with great prices on such televisions. The trailblazer in this regard was Incredible Technologies when they introduced the concept with their Golden Tee 2007 games. The unit came with a full arcade style & quality control panel but it didn’t come with a monitor. This allowed operators to buy and use the type of display that fit their budget and space, be it a 42” TV or by throwing the game up on a giant projection screen. This design is still used by the latest Golden Tee releases as well as titles like Big Buck Wild. 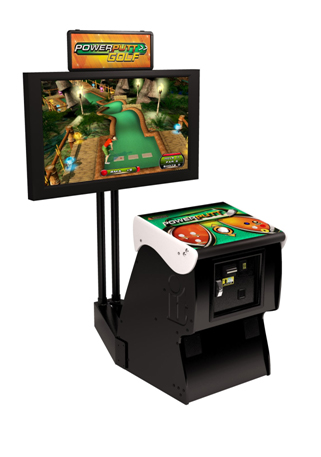 Similar to upright cabinets, candy cabinets feature similar shapes and sizes, with the difference that these are usually built out of metal & plastic and feature phenomenal quality screens. As a matter of fact, their shiny, plastic cases makes them look like novelty toys (in a good way) and earns them the name of candy cabinets due to this. These games seldom feature overhanging marquees and are usually designed for long stints of gaming. To this end, the controls are lower than normal, and the cabinets are designed so that a small chair or stool can be used in order to ensure the player’s comfort during long sessions.

The big ones. A Deluxe cabinet can still be an up-right but it can also be a sit-down model. The main point is that they are bigger than what is “standard” although what those standards are varies from manufacturer to manufacturer. These cabinets usually house driving or shooting games, and feature accessories to improve the player’s immersion when gaming, such as a racecar chair coupled with a steering wheel and even pedals. Other popular examples include motorcycle games featuring an entire motorcycle as the controller, flight simulators with a flight stick and a generous amount of buttons to control most aspects of the game. More advanced games may offer hydraulics to move the cockpit and simulate the onscreen movements and inertia. In that instance they are generally referred to as “Motion Deluxe” cabinets.

Other types of cabinet models include a variety of lesser-known modalities such as home models (identical to upright, but without coin slots), wall-hanging games that consist of cabinets that are hung like portraits or cockpit games, a style introduced back in 1979 by Exidy with their Star Fire video game. These days you may still find a variation of these (in the case of a cockpit, something like the Star Wars Battle Pod deluxe would qualify) but they do tend to be uncommon.

When it comes to types of cabinet, the shapes and sizes are often determined by the type of game contained within. However, on rare occasions, there may surface a new model that sets the bar for newer machines. However, until that time comes once again, the cabinets mentioned above are among the most common types of video arcade machines.