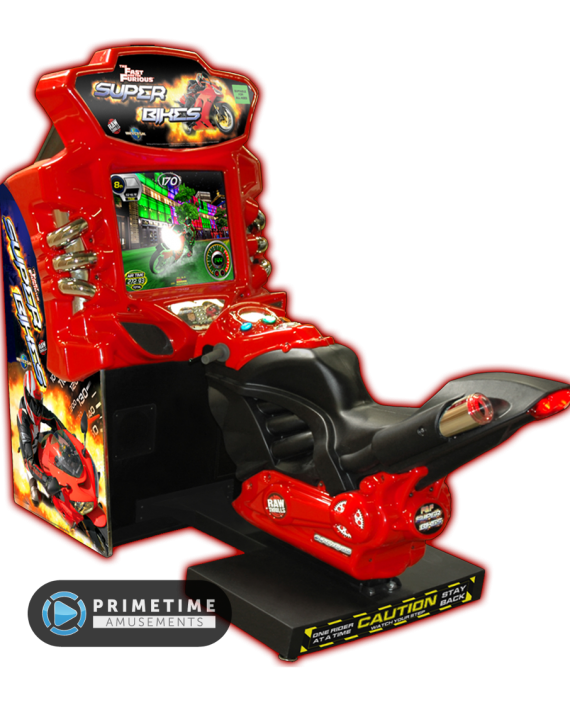 Take control of your own virtual Super Bike in Raw Thrills’ officially licensed, The Fast And The Furious Super Bikes arcade game.

After a long hiatus on the market without a motorcycle racing title, Raw Thrills created a complete simulator experience that has remained exclusive to arcades since this title was released in 2006. It uses a swivel bike controller, allowing you to take the turns by leaning into them instead of just turning a handle bar controller. Race across various exotic locations around the world on twelve different licensed motorcycles; pull off tricks, catch some air and dominate at the Finish Line!

– Swivel motorcycle controller with handlebar accelerator/brake; keypad for player account creation and use

– Twelve (12) selectable bikes to choose from plus 20 upgrade levels

– Stat tracking & player accounts saved locally on the machine, access via the keypad

– Raw Thrills’ FnF Super Bikes is no longer produced, having been released in 2007. Please call us about availability. All used models pass through PrimeTime Amusement’s “Certified Pre-Owned” program, which guarantees that the game will be completely refurbished and ready to operate upon arrival.

Want to see Super Bikes in person? You can find it at the PrimeTime Arcade inside the X-Treme Action Park in Ft. Lauderdale, FL!