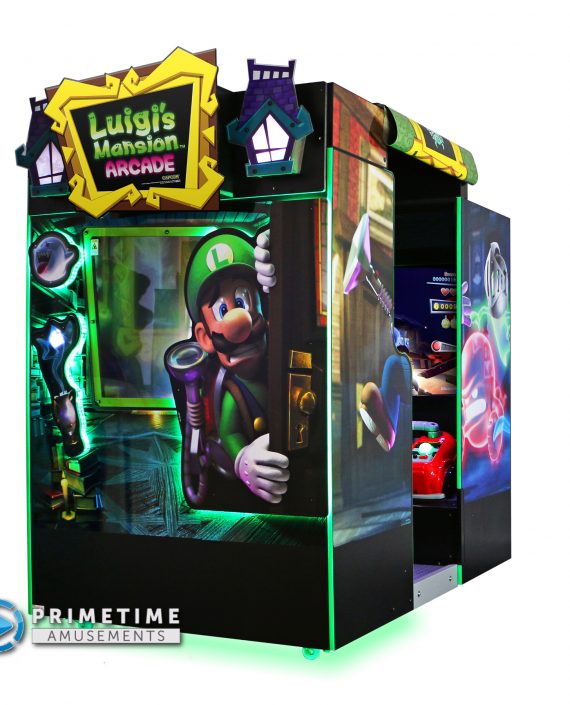 He may be known for his clumsy manner but the other Super Mario Brother, Luigi, isn’t afraid of no ghosts. Well…not too much. You can help him out in this unique arcade adventure!

Luigi’s Mansion Arcade is based upon the Luigi’s Mansion video game series that appeared both on the Nintendo Gamecube and 3DS game consoles. Now specifically tailored for the arcade market, you can take hold of a “real” Poltergust 5000 ghost vacuuming device as you rid a spooky mansion from it’s unwanted guests.

The Poltergust 5000 is a bit different from most light-gun devices that players are used to. There are two buttons – one for zapping/stunning ghosts or objects and the other for sucking them in. Since the ghosts don’t like to stay in one place for very long, stun them to sap them of their energy then suck them in by holding the trigger down and tugging in the opposite direction from where the ghost is trying to escape.

The game allows players to choose between Simple and Normal controls, meaning that if they are new to the game or lack the ability to juggle the two different control schemes, choose Simple and the game combines both stun/suck functions to the trigger.

– Plays unlike any light-gun game on the market as you collect coins, battle ghosts and solve puzzles

– Poltergust 5000 light-gun is shaped like the vacuum device that Luigi has to use in the game; 2 button control+motion sensing features are built into it.

– Close feature! The operator can activate this so that the game alerts players when the facility will be closing 15 min ahead of time. The game will then stop accepting credits for that time so that you do not need to worry about refunds.

– Number of credits to start or continue