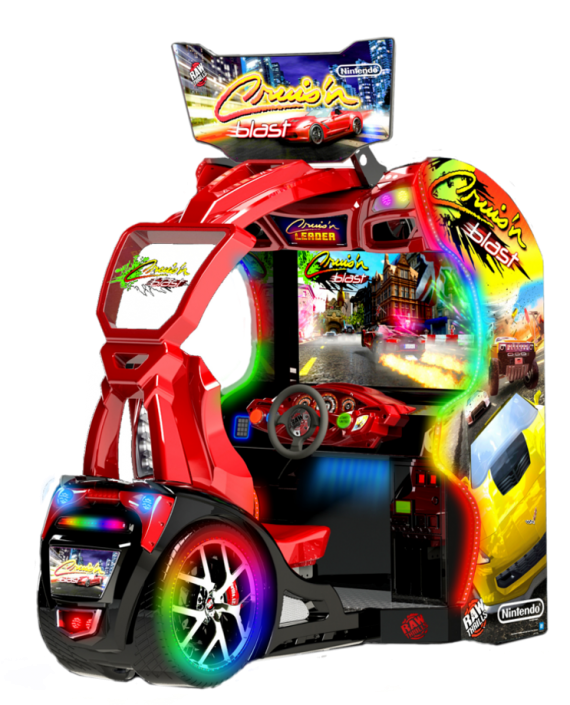 For anyone who grew playing arcades in the 90s, you know the name Cruis’n. Cruis’n USA, World and Exotica stormed the arcade scene at the time, bringing a fun and fast paced formula to racing with open circuits, crazy track designs and even crazier car tricks. Now thanks to Raw Thrills and the original game producer Eugene Jarvis, Cruis’n is back with Cruis’n Blast!

The 4th arcade installment of Cruis’n redresses the game design of the originals while freshening up the graphics and using a few ideas that were done in the popular Fast And Furious racing games of recent years. Players can pick from a variety of licensed vehicles or if you push the Tune button during car selection, wild choices like a Triceratops or helicopter! The tracks still use open circuit designs across 5 world locations: London, Madagascar, Death Valley, Rio De Janeiro and Singapore.

New to the game is the camera system so that each racer gets their picture taken to use as an avatar in the race. This makes for more exciting races and combined with Raw Thrills’ QR code social media sharing system, brag about your top racing scores to your friends! They also have introduced a “Blast” turbo boost feature into the game that gives you a chance to get that extra burst of speed when you need it most.

Check out Cruis’n Blast in action from IAAPA 2016

Cruis’n Blast is easy to control using the steering wheel and single foot pedal system. The cars will auto-race for younger players to enjoy the game although you’ll need to put the pedal to the metal if you want those top spots!

The game also ships in an attractive new cockpit design that stands out from every other racer on the market.

IMPORTANT: All units shipping from the factory after February 2020 will feature the V2.08 software build. This differs from v1.27, as the Lamborghini license has expired, thus the vehicle and some others have been removed and replaced in the game. There are five new cars, which are:

– The cabinet also features hundreds of RGB LEDs, creating an attractive game piece in any room

– Five high-intensity racing tracks from around the world

-Link up to 8 game cabinets for higher earnings. An 8 player setup is quite an attraction!

-NEW! USB Update port has been placed inside the coin door so you do not need to crawl behind the game to update the software.

Want to see Cruis’n Blast in person? You can find it at the PrimeTime Arcade inside the X-Treme Action Park in Ft. Lauderdale, FL!