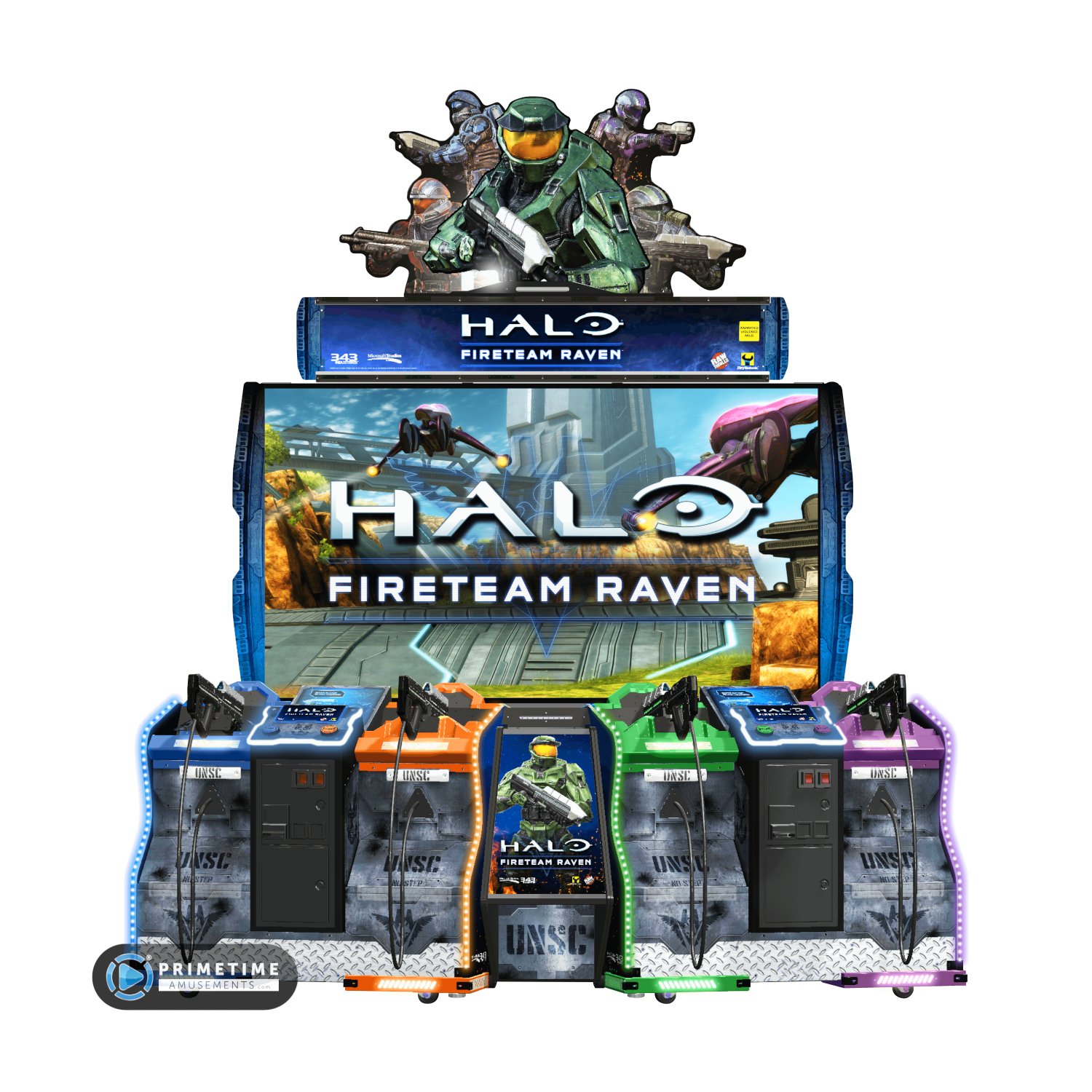 Since 2001, Halo has been a force to be reckoned with in the video game industry. It has spawned numerous sequels and spin-offs and been a major selling point for Microsoft’s various XBOX game consoles. Now, this worldwide phenomenon is available in arcades thanks to the combined efforts of 343 Industries, Microsoft, Play Mechanix and Raw Thrills with Halo: Fireteam Raven.

This particular listing is for the 2023 release of the Assault Model – an upright cabinet with an 85″ screen and four player stations. For the deluxe version of the game, click here; For the Super Deluxe 4-player model, click here (note that Super Deluxe units are no longer in production). The model replaces the Super Deluxe.

This new entry in the franchise takes place during the events of the first Halo game that was released to the original Xbox game console in 2001. Players join up with the special unit known as “Fireteam Raven” to support the Master Chief and push the Covenant off of the Halo ringworld, while unlocking the dark secrets of the ancient space structure. The arcade version has been re-designed as an on-rails gun shooter, with primary development being handled by the experienced team at Play Mechanix (their resumé includes Terminator Salvation, Aliens Armageddon, The Walking Dead and more).

See Halo: Fireteam Raven Assault Model in action from its debut at IAAPA 2022 in Orlando, FL. Video available in 4K UHD; subscribe to us on YouTube to stay up-to-date with the latest product videos!

The Assault model brings the same gameplay to the arcade without taking up the space that either previous models had. The coolest aspect about it are the guns – previously, the arcade models had used a mounted gun but this model features replicas of the iconic Assault Rifle from the game series. That alone can drive more players to give the game a spin, as they feel like they really a part of Fireteam Raven.

– NEW gun shells which replicate the Assault Rifle from the games; Pump to reload, push side button to launch grenades

– Around 45 minutes of gameplay increases continue plays and replay value!