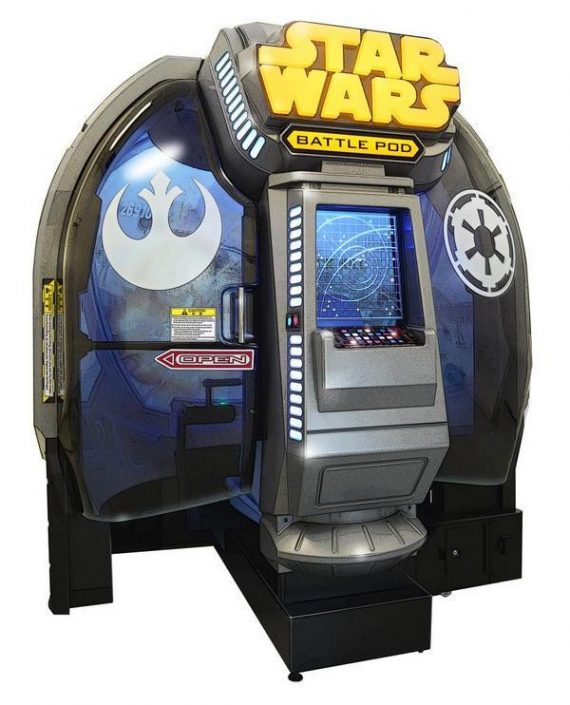 FIND A STAR WARS BATTLE POD NEAR YOU

Do you have what it takes to lead the Rebellion against the evil Galactic Empire? Tap into the Light Side of the Force and take the lead with Namco’s stellar Star Wars Battle Pod.

Impress your customers and boost your profile with the true Battle Pod Deluxe model. This offers an enclosed “theater” design and sports the cutting edge seamless dome screen. It also includes a wind blower for a “4d” special effect and a camera (only operable with two linked Pods). With cutting edge tech like this, show that arcades still have it!

Where a small number of people may feel a little vertigo from the curved screen, we recommend that they use View Change button when in the game to overlay a cockpit. This helps you focus more on the center than on having your brain process the entire screen.
As you fly through the levels, your objective is to blast the enemies that are indicated on your screen with arrows. If you can hold a target in the center of your screen long enough, a missile lock will be established and you can take them out with a press of the thumb button. This is also how you obtain combo kills. Quick kill points are awarded for enemies that you can eliminate within a short amount of time.

The game requires the player to pay to continue regardless their success in the mission or not. The way to obtain a score in the top 3 is to complete all these missions with two or three stars.

-Arcade Exclusive – beyond the software not being available on console or mobile, the hardware on this game cannot be replicated by a home device!

-Play levels based on the popular “Original Trilogy”: Death Star battle @ Yavin; The Battle of Hoth; Mission on Endor; Death Star Battle II and a unique level made just for this game – Darth Vaders Revenge!

-Software Updates so far include the Battle of Takodana from Star Wars Episode 7 (Note: This is a paid update)

-The large dome screen is unlike any other display in the arcade. The seamless design means no ugly bars cluttering up the view

– Bandai Namco’s Star Wars Battle Pod is no longer produced, having been released in 2015. Please call us about availability. All used models pass through PrimeTime Amusement’s “Certified Pre-Owned” program, which guarantees that the game will be completely refurbished and ready to operate upon arrival.

-Difficulty settings (changes amount of Shields available to the player)

Do you have more questions or are you ready to buy the Star Wars Battle Pod?