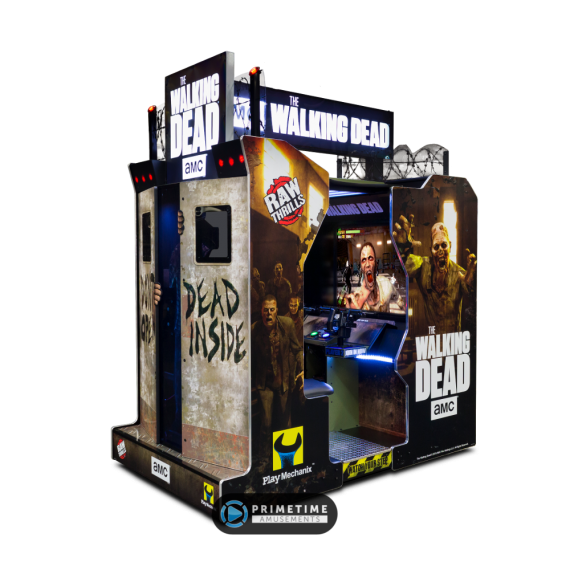 The biggest zombie franchise on television today is now storming arcades around the world with AMC’s The Walking Dead.

Designed by Play Mechanix (Terminator Salvation, Big Buck Hunter, Aliens Armageddon), The Walking Dead arcade puts the players into the shoes of a couple of human survivors attempting to escape from the West Georgia Correctional Facility after it is overrun by zombies. At your disposal is a realistic looking crossbow controller which is mounted to the front panel. As you would expect, zombies can only be re-killed by head shots so make sure to hone your aiming skills as you play (the game does take pity on the player by offering occasional “Bullet Time” events so that it is easier to snipe certain zombies).

True to the TV series, the game also gives the player chances to use any weapon at your disposal to survive – axes, knives, crowbars, explosive arrows, propane tanks, hammers and more. Combined with a 1080p HD screen and a new ambient lighting system, this game is sure to scare up record profits!

– Exclusive to arcades: this game is not coming to any home console or mobile device

– Taps into the never-ending popularity of the zombie apocalypse, particularly the hit TV show by AMC

Want to see The Walking Dead in person? You can find it at the PrimeTime Arcade inside the X-Treme Action Park in Ft. Lauderdale, FL!

What to see the game unboxed and installed? Click here for a TWD unboxing video by our friends at Arcade Heroes.