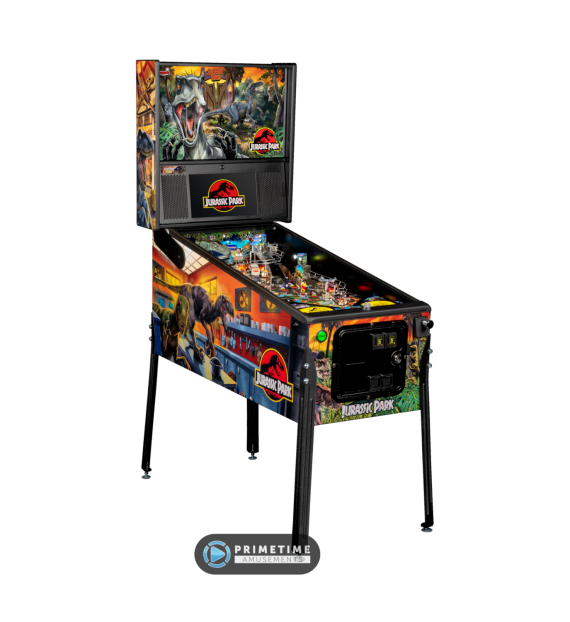 Few franchises have captured the imagination of the general public as Jurassic Park.Now you can enjoy a modern take on the franchise with Stern Pinball’s Jurassic Park, the third appearance of the series in the pinball genre. This listing is for the Premium & LE models; Pro Editions are also available!

Designed by Keith Elwin (a new designer who created Iron Maiden: Legacy of the Beast), Jurassic Park is crafted to take you into the terrifying world of the hit 1993 film that was directed by Steven Spielberg. The path to a high score is fraught with danger, as you must rescue park staffers and put dinosaurs back in their cages by hitting the right targets. Unlock four different multiball modes for additional excitement. You also collect “Perks” that enhance your scoring and will stick with you through your full game.

Premium/LE Models include the following enhancements over the Pro: Animatronic T-Rex head that eats and spits the ball out onto the playfield; spinning metal helicopter that interacts with the ball; Kinetic lunging raptor+target; 4 up-posts instead of 3; mosquito in amber pop-bumper caps; unique cabinet and backglass artwork.

– Attractive theme to people of all ages – adults have fond memories of the 90’s films, kids always love dinosaurs

– 4 different multiballs ranging from 2 to 6 balls

– Playfield paddock map and inserts for player to traverse, culminating in 3 mini-jackpots and a super jackpot

– Plethora of operator options to adjust the game to your location needs; also works great for home use!