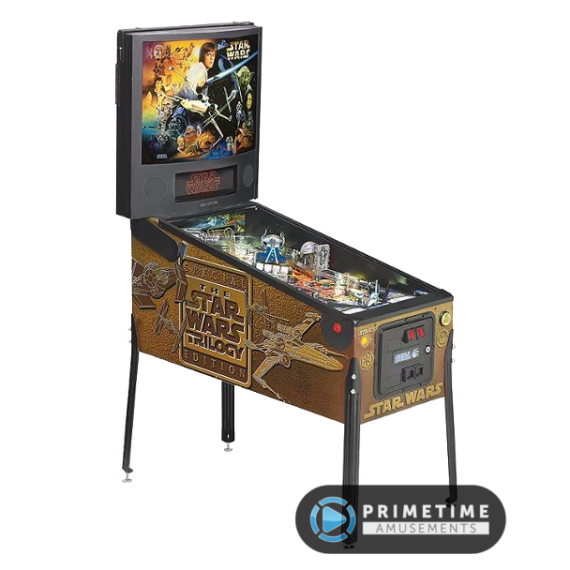 Star Wars Trilogy Pinball by Sega Pinball (later became Stern Pinball) is a must have for any serious Star Wars or pinball collector.

The game combines some of the best elements from the original trilogy (Episodes IV, V & VI) including saving the carbonite frozen Han Solo to defying Turbolasers and battling Darth Vader’s TIE fighter. This is one beautifully crafted game that features two furious multi-ball modes: 3-ball that launches once you destroy all of the active TIE Fighters and a 4-ball Millennium Falcon mode that starts when you spell out F-A-L-C-O-N. The game also features challenging Heroic Modes that can lead you to an Extra Ball. Overall this provides the excitement you’ve come to expect from the Star Wars franchise, making this pinball machine a real keeper!

– Based on the beloved ‘original trilogy’ of the Star Wars franchise

– Two multi-ball modes as described above

– Sega/Stern’s Star Wars Trilogy Pinball is no longer produced, having been released in 1997. Please call us about availability. All used models pass through PrimeTime Amusement’s “Certified Pre-Owned” program, which guarantees that the game will be completely refurbished and ready to operate upon arrival.