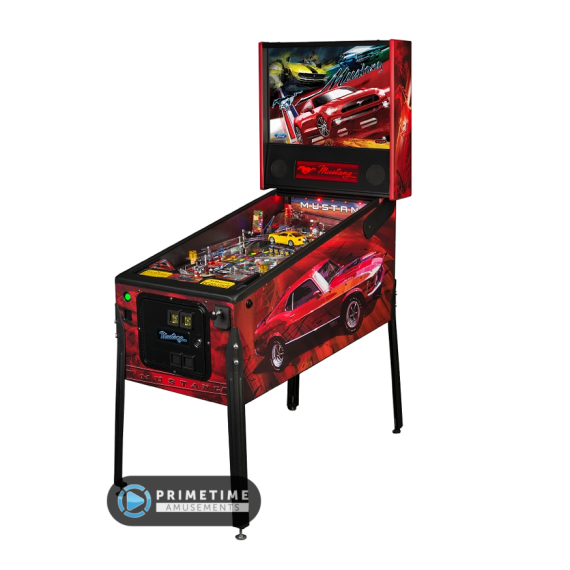 Flex your muscle with one of the legendary cars in the world, The Ford Mustang, in this officially licensed pinball machines from Stern Pinball.

The entire line of Ford Mustang pinball machines are a tribute to 50 years of Ford Mustang history. Built in three model types (Pro, Premium, LE),  the Mustang Pro features Mustangs from the past five decades; The Mustang Premium Edition showcases the Mustang Boss 302, 351 & 429 models, and the Limited Edition Model was signed by the designers and features the original 1965 Mustang and the all-new 2015 Model. Both Premium and Limited Edition Models feature Genuine Chrome Mustang Speaker Grille Badges.

Mustang Pinball Machines features the voice of famous race driver and television host Tanner Foust, and comes with five decades of music to select from, by artists like Motorhead, Jan & Dean, The Romantics and many more.

The games also incorporate a mix of classic pinball features with modern technology to allow players to “go racing” with some the greatest Mustangs of all time. Players experience the thrill of building an amazing dream collection of the most desirable cars within the brand including GT’s, Mach 1’s, Cobras, Boss Mustangs and the 2015 Mustang as they progress in the game. There are different interactive sections in the playfield, and hitting specific targets enables gear shifting, and subsequent hits activate shifting of gears up or down. Each game features Stern’s red video display in the backboard and real Mustang sounds, giving players the visceral experience of driving a Ford Mustang.

Players also race against an array of colorful game characters in (8) different racing scenarios including drifting, drag racing, road races, rallies and police pursuits. Take down the “Shift” Drop Targets to shift your way up thru the gears into “Gears” Multiball. Shoot around the playfield to earn Ford Racing parts and customize, modify and tune your cars ! Advance thru the challenge ladder in order to race in the Silverball Stampede, an all-out coast to coast run against all of the wacky in-game opponents.

– Each model features artwork that showcases the car, with the Premium and LE focusing on rarer models.

– Select your music from a roster provided by Sony Music that covers five decades of hits. Pro Models have four tracks while Premium & LE feature eight

– Premium/LE includes a turntable mechanism that the Mustang is mounted on; the ability to swap out your own Mustang model by Maisto or M2; Full color spectrum LEDs underneath arrows; a genuine Ford chrome pony emblem; a deluxe lockdown bar w/ action button ; 2 Road Hazard drop targets and more.

– Stern’s Mustang Pinball is no longer in production, having been released in 2014. Please call us about availability. All used models pass through PrimeTime Amusement’s “Certified Pre-Owned” program, which guarantees that the game will be completely refurbished and ready to operate upon arrival.

Check out Mustang Pinball in action from our friends at Arcade Heroes:

Rentals might also be available for this unit, if one is available.