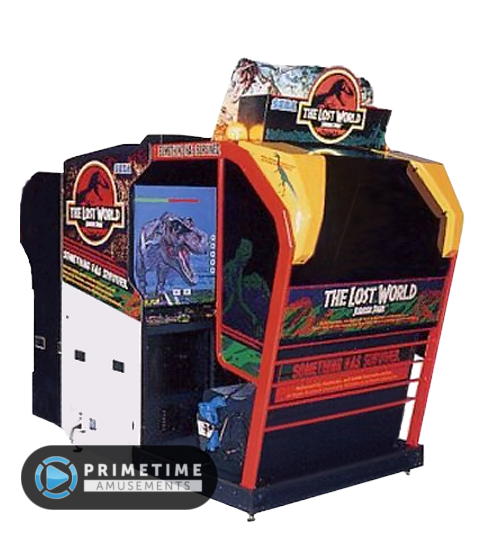 The Lost World: Jurassic Park by Sega offers an intense dinosaur shooting experience in a Jurassic Park jeep-themed sit-down cabinet. Sporting mind-boggling graphics displayed on a 50″ monitor and an awesome 4 speaker surround sound system, players will get to revisit the dangers of Jurassic Park in all of it’s glory.

This timeless classic also features epic battles with the King of the dinosaurs, the T-Rex! It is an unforgettable boss battle that brings players back time and time again.

– Exclusive to Arcades – the home versions of this game were cancelled.

– Developed by Sega’s AM3 division

– Deluxe theater cabinet let’s players sit down and feel as though they are inside of a Jurassic Park jeep.

– Sega’s The Lost World: Jurassic Park is no longer produced, having been released in 1997. Please call us about availability. All used models pass through PrimeTime Amusement’s “Certified Pre-Owned” program, which guarantees that the game will be completely refurbished and ready to operate upon arrival.

– Ask about converting the original 50″ projection TV to a modern, crisp LCD!

Do you have more questions or are you ready to buy? Rentals may also be available! Call our friendly sales staff for more information or email us here!