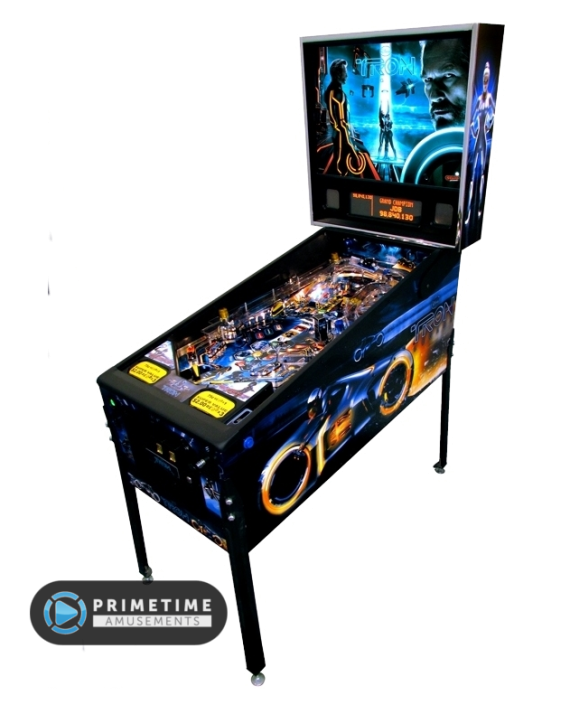 Based upon Disney’s TRON sequel/reboot from 2011, TRON Legacy Pinball puts the players in the middle of The Grid as you fight for the Users in the video game & computer world. Designed by John Borg, who has designed numerous hits for Stern over the years.

In this game, you are user Sam Flynn who has unexpectedly found himself digitized into the computer of his lost father, Kevin Flynn. With three flippers, two Fast Action ramps, a Recognizer motorized 3-Bank target and a motorized and spinning Rinzler Indentity Disc, you take the battle straight to the evil Clu and his henchmen.

The spinning disc shoots the ball randomly across and around the playfield to simulate a Disc War. Ramp shots take players to an exciting Light Cycle Multiball feature. Shooting at the mini-TRON Video Game included starts exciting table features and collects big points. In addition, four TRON targets are included, along with two Spinning Targets and numerous other targets, and three Pop Bumpers.

– Based on the original TRON film and the 2011 sequel, TRON Legacy by Disney Studios

– Music and voice overs pulled straight from the films

– Deep rule set that features modes based on characters from the Legacy film including Quorra, Zuse, Gem, Clu and Kevin Flynn

– Stern created four editions of this game, including a 400 run LE. The other two editions (known as 3rd & 4th Edition) were modified Pro models with different backbox artwork and added wiring for after-market shaker motor upgrades

– This game is no longer in production and is only available used. Please ask us about current pricing and availability. All used units come with a 30 day warranty from PrimeTime Amusements and are also refurbished to ensure that you are getting a high-quality game that is ready to go on setup.

Check out this official production from Stern Pinball that shows the TRON Legacy Pinball game features in more detail: