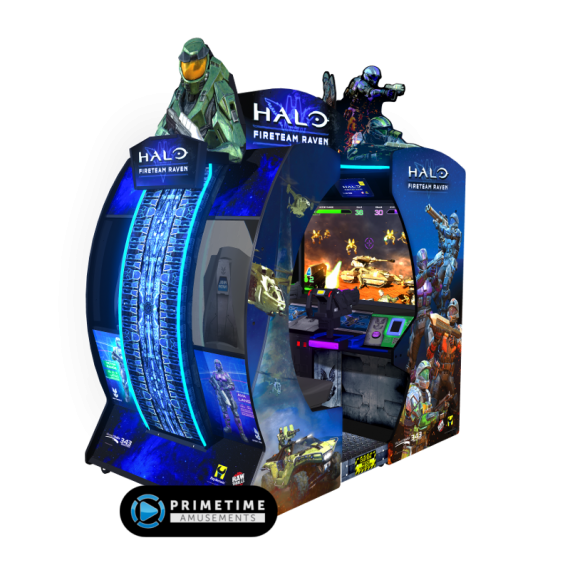 Since 2001, Halo has been a force to be reckoned with in the video game industry. It has spawned numerous sequels and spin-offs and been a major selling point for Microsoft’s various XBOX game consoles. Now, this worldwide phenomenon is available in arcades thanks to the combined efforts of 343 Industries, Microsoft, Play Mechanix and Raw Thrills with Halo: Fireteam Raven.

This particular listing is for the Deluxe version of the game. For the Super Deluxe 4-player model, click here.

This new entry in the franchise takes place during the events of the first Halo game that was released to the original Xbox game console in 2001. Players join up with the special unit known as “Fireteam Raven” to support the Master Chief and push the Covenant off of the Halo ringworld, while unlocking the dark secrets of the ancient space structure. The arcade version has been re-designed as an on-rails gun shooter, with primary development being handled by the experienced team at Play Mechanix (their resumé includes Terminator Salvation, Aliens Armageddon, The Walking Dead and more).

See Halo: Fireteam Raven Deluxe in action from the International Bowl Expo 2019 in Las Vegas, NV. Video available in 4K UHD; subscribe to us on YouTube to stay up-to-date with the latest product videos!

The two player model was designed to cater to venues that may not have the space or budget for the massive Super Deluxe models. Deluxe units provide the same great entertainment and action for 1-2 players, in an environmental cabinet that is similar in size to Jurassic Park Arcade or The Walking Dead Arcade. Users will still enjoy 5.1 channel surround sound in each seat and can post scores through their Xbox Live Gamertag using Raw Thrills’ QR Code sharing system.

– Around 45 minutes of gameplay increases continue plays and replay value!