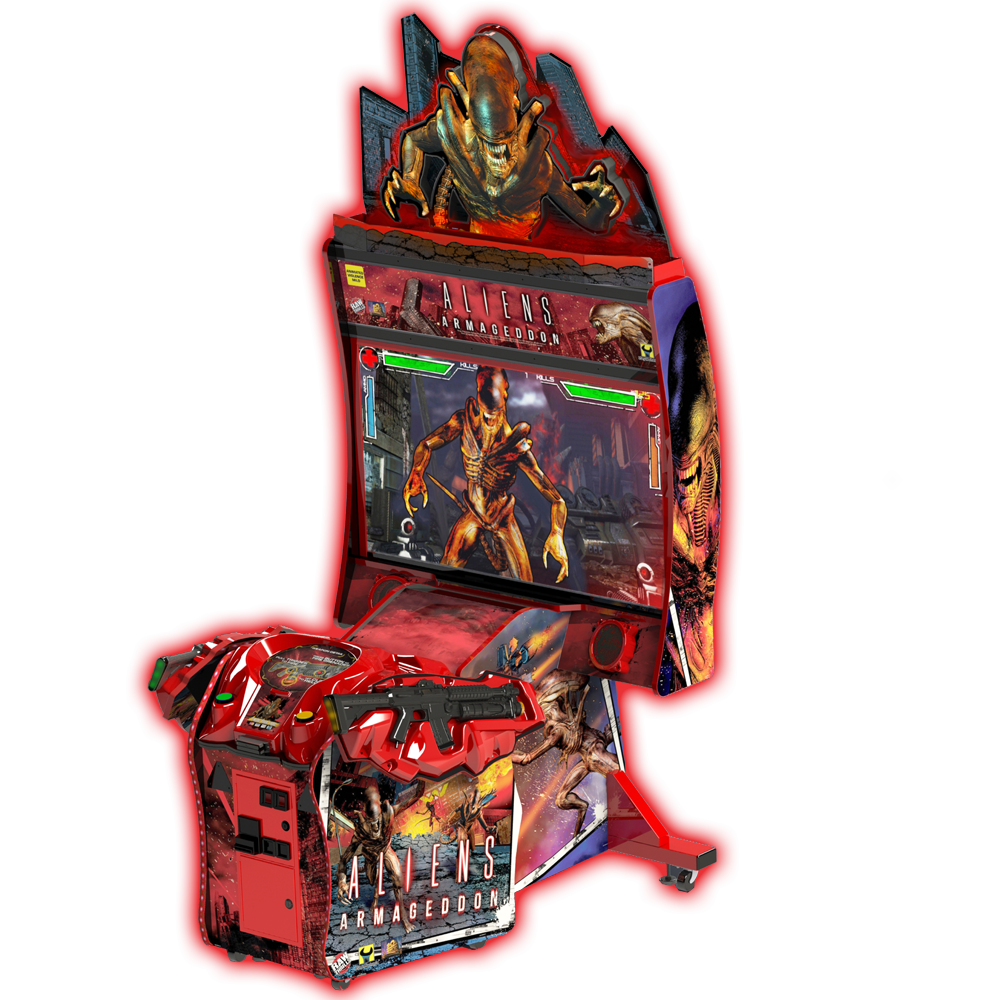 Looking for the Standard version of Aliens Armageddon? Click here!

The deadly xenomorphs have finally reached Earth and it is your job to save the last survivors of humanity by bringing them to the Ark. Armed to the teeth, you and your fellow Marines must fight your way through the alien infested streets, eliminating any threats that you encounter along the way.

Aliens Armageddon is an arcade exclusive light-gun shooter developed by the same company that created Aliens Extermination and the Big Buck Hunter series. In many ways it is also a follow-up to the popular Terminator Salvation shooter released in 2010. It offers fast-paced action over 4 chapters that players can either play through as a complete story or they can jump ahead to a chapter if they wish. It also has excellent modern graphics, running at 1080p and at a creamy smooth 60 frames per second. Players will confront the infamous Xenomorph aliens but will also encounter unique Alien types that slither along or fly in the air.

In the Deluxe model, it sports a 55” screen and redesigned free rifles that improve on the guns used with Terminator Salvation. This model is great for locations that have the space and want to have a high earning gun piece on their floor.

-1 or 2 players. Play for the top score or compete with a friend to see who is the best marine

-Power-ups are scripted so all players will experience the chance to use weapons like the flamethrower, shotgun, smart gun or sniper rifle.

-Reload by hitting the “clip” on the bottom of the gun, just like Terminator Salvation OR shoot off screen

-Some Alien designs have not been seen in the films, only comic books

– Raw Thrills’ Aliens Armageddon is no longer being produced, having been released in 2012. Please call us about availability. All used models pass through PrimeTime Amusement’s “Certified Pre-Owned” program, which guarantees that the game will be completely refurbished and ready to operate upon arrival.

-Number of credits to start or continue

Want to see Aliens Armageddon in person? You can find it at the PrimeTime Arcade inside the X-Treme Action Park in Ft. Lauderdale, FL!