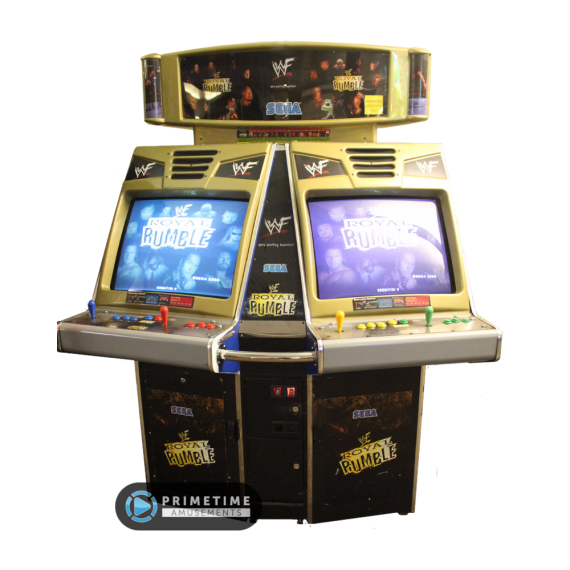 Sega has teamed up with the WWF once again, this time bringing The Rock and his tag team partners into the action that will leave the competition reeling from the People’s Elbow!

In WWF Royal Rumble, users can play as one of the 21 biggest names in the WWF including Stone Cold Steve Austin, The Rock, The Undertaker, Kurt Angle, The Godfather and various others. Pull off each star’s signature moves such as Steve Austin’s Stone COld Stunner; The Rock’s Rock Bottom; The Undertaker’s Choke Slam; Triple H’s Pedigree and Rishiki’s 21. Sega went through painstaking trouble to motion capture hundreds of animations per wrestler to make the player feel like they are watching a live WWF event! With two game modes (Exhibition and Royal Rumble) and multiplayer action this is must get for any arcade.

– The last wrestling game released to the Western market

– Officially licensed WWF product with likenesses of many famous wrestlers

– Sega’s WWF Royal Rumble is no longer in production, having been released in 2000. Please call us about availability. All used models pass through PrimeTime Amusement’s “Certified Pre-Owned” program, which guarantees that the game will be completely refurbished and ready to operate upon arrival. Also ask about our game rentals!