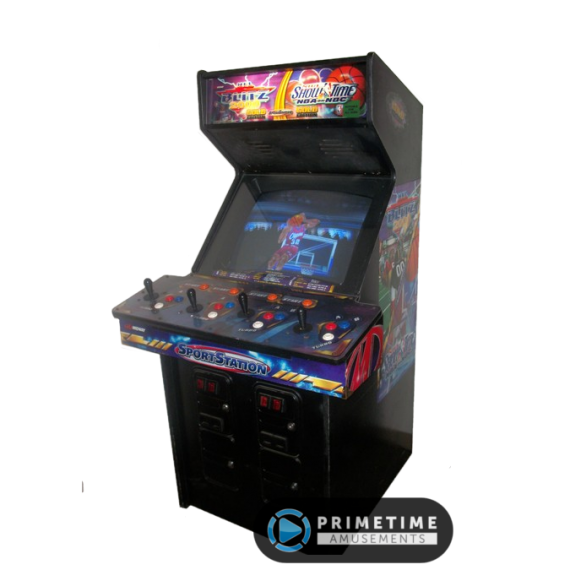 NFL Blitz 2000 Gold – The ultimate version of NFL Blitz by Midway, offering the most recent team rosters up to that time, game fixes, plays, game customization ability (change the stadium, field type and weather conditions), and graphics/sound updates. It is everything you know about NFL Blitz but improved!

NBA Showtime: NBA on NBC – The final arcade release in the NBA Jam series of titles, NBA Showtime features a roster of players that was up-to-date for the time (1999 season) with 160 players while providing a full 3D experience to the NBA Jam style of play. You can also improve on player stats and enjoy superstar moves. This is everything you would want out of an arcade basketball experience!

– 3D graphics powered by the 3DFx based Vegas hardware platform

– 25″ CRT screen. Can be converted to a modern LCD, call about pricing!

– Midway’s SportStation is no longer produced, having been released in 1999. Please call us about availability. All used models pass through PrimeTime Amusement’s “Certified Pre-Owned” program, which guarantees that the game will be completely refurbished and ready to operate upon arrival.