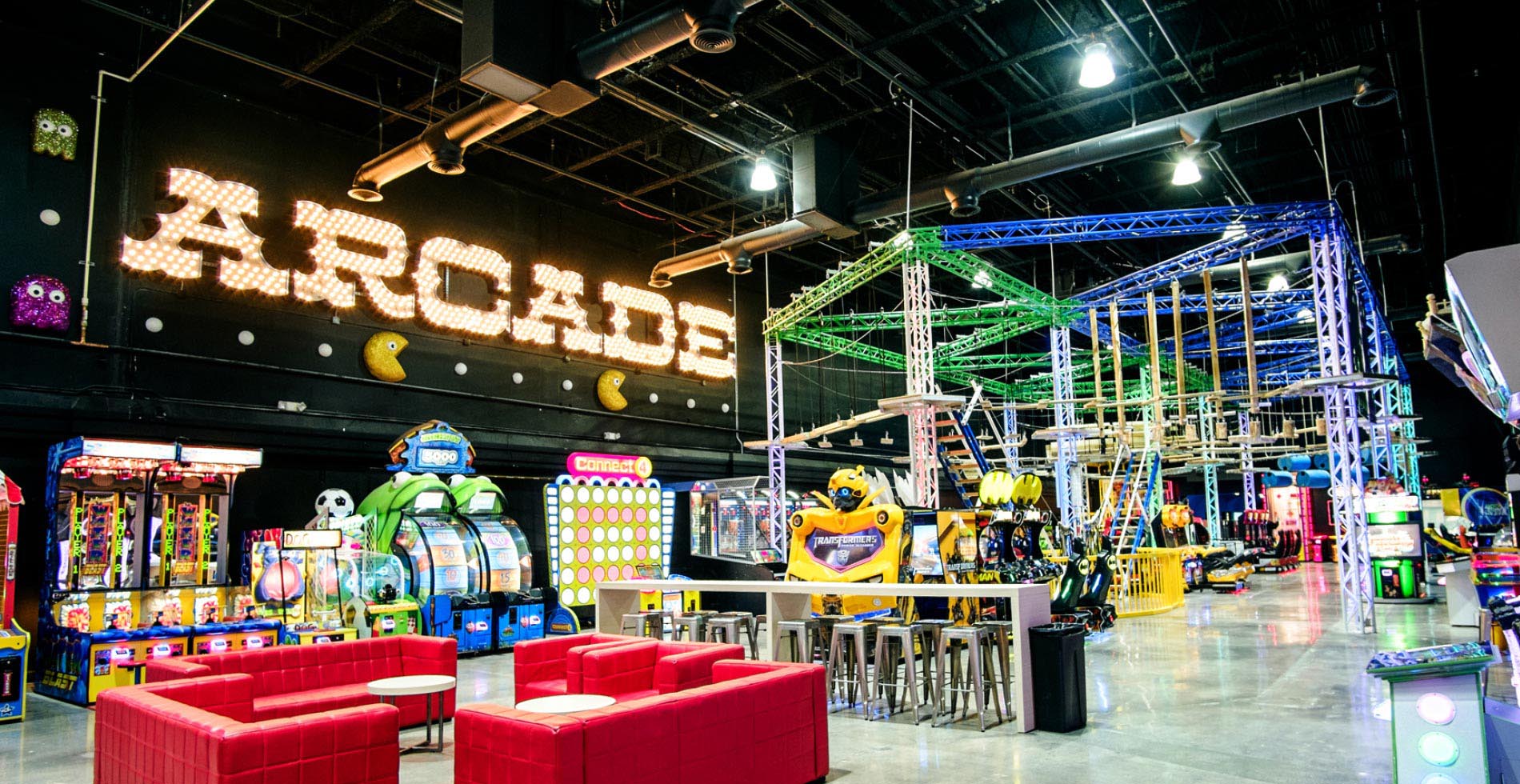 I’ve been looking back at the topics we’ve touched over the past few weeks on our previous blog posts, only to notice one thing in particular: We’ve always referred to arcade gaming as a relic of the past. Articles such as “History of Arcade Gaming”, “Top Arcade Games of the 90’s”, or even “Fun Facts About Pac-Man”, only serve to bring the best of this industry’s past, while leaving the games of the present in the background. The truth is, despite arcade gaming’s huge success in the 80’s and 90’s, its fame has been rather dwindling in the current decade, partly due to home consoles and PC gaming’s success.

However, that’s not to say that this industry is without its generous share of great games; the fact that users prefer to play from home instead of visiting their local arcade doesn’t mean that there aren’t developers that still create games for this platform; games that are awe-inspiring in their own right. Furthermore, there are also quite a bit of adaptations of popular console games in local arcades; games that boast the graphics of their console counterparts (with some improvements, in some cases), while featuring new gameplay mechanics that are appropriate in an arcade environment.

That being said, let’s take a short break from the past and focus on the games that make the present state of arcade gaming so great. Here is our list of top modern arcade games: 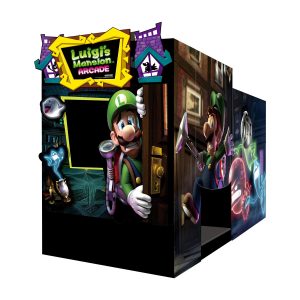 Based on the popular game series by Nintendo, Luigi’s Mansion Arcade takes our mustachioed protagonist once again into his haunted manor in hopes of catching every single ghost. Technically, this game isn’t a sequel, but rather a remake to the first Luigi’s Mansion game which was released in 2001 for the Gamecube. The objective of the arcade version is similar to the Gamecube’s; go to the manor, investigate what’s up, and catch every single ghost you can with your trusty Poltergust 5000.

There’s no Mario to rescue this time around, but there are enough enemies and bosses displayed with colorful graphics and immersive sound effects to keep you busy for hours on end. This game is displayed in a glorious HD flat display, complemented with surround sound technologies to keep the player engrossed in the action. 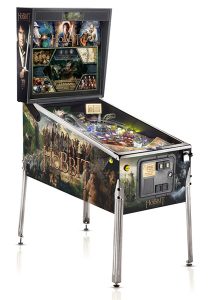 Pinball is by no means a new game. However, there are always new themes and motives being adapted into newer Pinball machines. This one is inspired by JRR Tolkien’s famous novel from which the game gains its namesake, “The Hobbit”. As you may well know, this literary masterpiece was adapted into a trilogy of films directed by Peter Jackson. The movies were very famous in their own right, spawning tons of merchandise, clothing, video games and, evidently, pinball machines.

The machine has a lots of features; much too many to list them in this list. What we can say about it though is that it has several gameplay modes, cool graphics on the 27” LCD screen, a Smaug figure with which the player can interact, several pop-up monsters, 3 flippers, and 11 drop targets. There’s much more to this machine than we can say right now, so if you’re interested, please feel free to check out this video by Jersey Jack Pinball, the game’s creator. 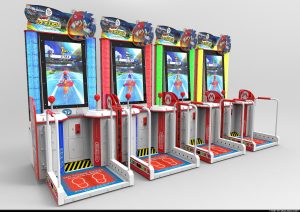 This game is definitely a living testament to how time changes everything. A decade ago, no one could’ve ever guessed that Nintendo’s mascot would meet against Sega’s mascot in the court to play with, or against each other to decide who’s the best athlete around. That’s right, in this game Mario and his friends meet up with Sonic and his crew to compete in a series of olympic disciplines to find out who comes out on top and be crowned the best competitor in the world.

Some of the disciplines included in this game are 100m Sprint, Archery, and Hammer Throw, among others. It’s worth mentioning that this arcade game is an adaptation of the series of games created by Nintendo for the Wii and DS handheld console. These games were based mainly on the 2008 Summer Olympics in Beijing. The arcade version requires dexterity in the user’s hands to properly operate the joysticks, as well as physical prowess to finish each event successfully since there is also a mat beneath his or her feet (similar to DDR’s) that serves as another input tool. 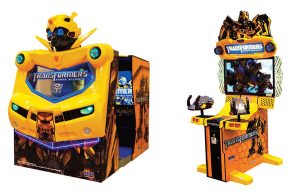 The action packed scenes and scenarios from the famous series of Michael Bay movies makes it into the arcade industry with this game. This cabinet is based on the timeless animated cartoon series Transformers, which involve the struggle between rival factions, the Autobots and Decepticons which we have grown to know and love throughout the years. In this game, the players have to shoot their way through 5 cities in 3 different continents to defend them from the rampant Decepticon menace. To do this, the user must team up with one of three famous heroes, Bumblebee, Sideswipe, or the charismatic and fearless leader himself, Optimus Prime. The endgame is to stop the decepticons from obtaining the All-Spark; the object that may bring any mechanical object to life.

This game comes in a very cool Bumblebee themed cabinet, and is played on a 55” HD screen in an enclosed surround-sound environment.

Ok, we lied; we’re not only sticking to modern games on this list. In our defense, this isn’t so much a retro game as it is an HD remaster of a timeless classic. Galaga Assault takes the formula from the classic space shoot ‘em up game that was first released in 1981, and gives it a complete facelift. The modernized version of Galaga is displayed in a glorious 1080p 42” monitor with brand new effects and visuals, coupled with enhanced sound effects that are both new, and yet reminiscent of the original. This machine also comes with a built-in QR code feature that allows you to post your high-scores directly to your Facebook feed. Compete with your friends for the highest score and show them who’s boss! 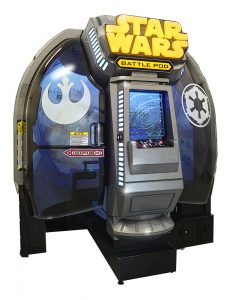 Ever thought about how it feels to hop on the gunner seat of the Millennium Falcon? With Star Wars Battle Pod you can turn those thoughts into reality! This game allows you to discover what it’s like to mow down Imperial Star Destroyers and Tie Fighters by manning one of the turrets of Han Solo’s famous smuggling vessel. Deliver the hurt to the Imperial scum in Star Wars Battle Pod either alone or with a friend, in full HD graphics. The seat and screen of this game are tilted in 20° so that the players may enjoy the realism of operating the vehicles and get fully immersed in the non-stop action.

This game uses a 42” screen and graphics powered by the Unreal Engine to provide never-before seen visuals in a Star Wars game.

To summarize; there are a ton of arcade games currently available on the market, with quite a few others being developed as I write this article. While the classics surely gave most of you lots of hours of entertainment, they were just a (very prominent) part of arcade history. Now, the modern games have arrived to stay, marking a new paradigm in the arcade gaming industry.

Discover more articles related to the amazing world of arcade gaming by visiting our blog. And hey, if you like any of our content, or would like to leave suggestions for new topics, feel free to leave a comment in the section below. Here at PrimeTime Amusements we always strive to be ahead of the curve when it comes to arcade gaming sales and rentals. If you’re looking for a game in particular, feel free to give us a call at 1.800.550.0090, or visit us at our headquarters located at 5300 Powerline Rd. Suite 210, Ft. Lauderdale, Florida, where our team of knowledgeable agents will be glad to assist you with any inquiries.

5D Amusements - The Future of Entertainment?

Building Your Own Arcade Pt. 1: Types of Arcade Games