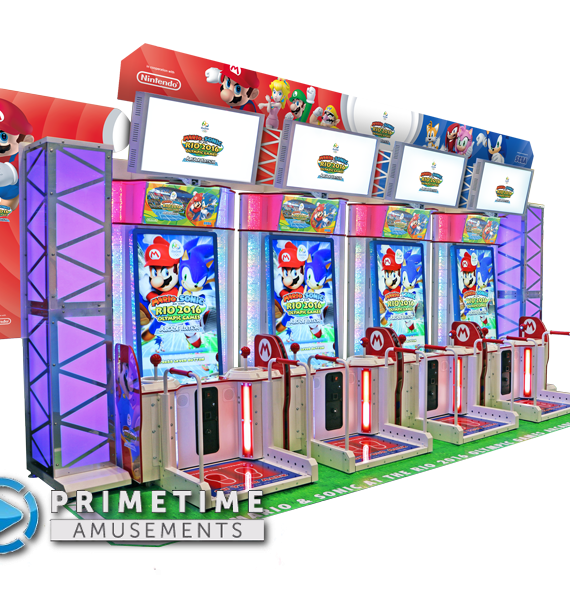 It’s an arcade sporting event unlike any other, featuring characters from Nintendo and Sega!

What would happen if the biggest names in video gaming came together to compete in the Summer Olympics? Thanks to Mario & Sonic At The Rio 2016 Olympic Games Arcade Edition, you can find out!

What makes this really unique from the console versions of the game are the controls that Sega created just for Arcade Edition. The game features a pair of over-sized joysticks (w/ 1 thumb button on each side) and a foot sensor pad. Before each event, the game has a tutorial that teaches the player how to use the controls to play. With 2 and 4 player models available, kids and adults alike will have a blast seeing how they would do in the Olympics!

– Two of the biggest franchises in gaming come together for some friendly competition for all ages!

– Two (2) and four (4) player models available. The four player model includes a deluxe marquee with a TV screen above each player station along with a camera to capture the user’s reactions as they play

4-player models have the same shipping dimensions as the 2-player model but include an extra set of both pallets AND also have the marquee shipped on a separate pallet.

Want to see Mario & Sonic Olympics in person? You can find it at the PrimeTime Arcade inside the X-Treme Action Park in Ft. Lauderdale, FL!