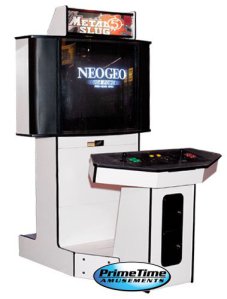 Metal Slug 5 continues the great “run ‘n gun” tradition of it’s predecessors, offering new features and environments for users to enjoy. This was also the final Metal Slug release for the Neo Geo MVS hardware before the series made the jump to more powerful platforms like the Atomiswave.

Metal Slug 5’s story goes as follows: “A special disc that contains deep and intricate secrets about the Metal Slug project is stolen by a mysterious group called the Ptolemaic Army, whose specialty lies from within archaeological excavation and espionage. Marco and Tarma of the Peregrine Falcon Strike Force follow in hot pursuit against the group and in the process are joined by Eri and Fio of SPARROWS. Together once more, the quartet investigate the shrouded objective of the Ptolemaic Army.”

Players also can enjoy the new “slide-dash” move, three new vehicles including the Spider Slug and more to make this game a winner!

– NOTE: Cabinet design can vary as this was released as a kit and not a dedicated version

– Core gameplay is the same as previous installments (run, jump & shoot) while new moves like a the slide dash has been added

– SNK’s Metal Slug 5 is no longer in production, having been released in 2003. Please call us about availability. All used models pass through PrimeTime Amusement’s “Certified Pre-Owned” program, which guarantees that the game will be completely refurbished and ready to operate upon arrival. Also ask about our game rentals!