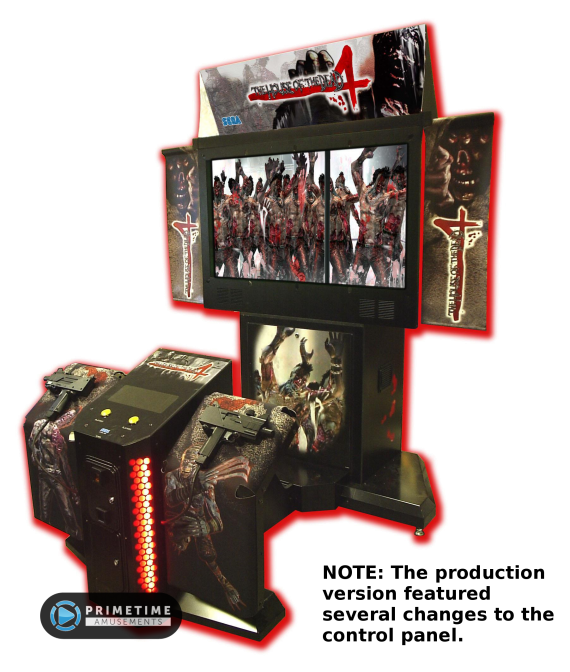 House of the Dead 4 Deluxe

CLICK HERE TO DOWNLOAD/VIEW THE HOUSE OF THE DEAD 4 MANUAL (UK VERSION; PDF)

Sega has created many legacies through their history and The House of the Dead series is one of their best-known. In House of the Dead 4, you face off against the largest zombie hordes in the franchise’s history, armed with an automatic gun to help manage the challenge.

House of the Dead 4 is a story that takes place between the 2nd and 3rd games. As AMS agent James Taylor and Kate Green are caught in the middle of a new zombie apocalypse that was started by the evil Goldman, you try and put a stop to the horror and the destruction that was caused by Goldman’s experiments.

House of the Dead 4 features red uzi-style hand machine guns. This allows the player to take out larger groups of fast-moving zombies. That said, the player is still judged on accuracy so be careful not to ‘spray-n-pray’ if you hope to get a high score. The gun also features a grenade button to help clear out groups a little faster and you simply have to shake the gun to reload. There are also instances where you have to shake the zombies off by shaking your gun.

With that and memorable boss battles, House of the Dead 4 is still a great game to have on the arcade game floor.

This entry is for the Deluxe model, which shipped with a 52″ HD DLP monitor. Sega also produced the game in a Super Deluxe format (62″ HD screen) and a 29″ standard CRT unit.

Sega’s House Of The Dead 4 Features:

– 1st game to be powered by Sega’s Lindbergh hardware

– For 1-2 players; each has an uzi that can be held with one hand; grenade button on the left side of the controller and senses when the user shakes it to reload

– Booming sound system captures the terror of the hordes

– Each stage ends with a rating, judging the player on skill such as headshots and accuracy

– Multiple secrets to uncover and four different endings to play for

–  Sega’s House The Dead 4 is no longer produced, having been released in 2005. Please call us about availability. All used models pass through PrimeTime Amusement’s “Certified Pre-Owned” program, which guarantees that the game will be completely refurbished and ready to operate upon arrival.

Check out House of the Dead 4 in action: