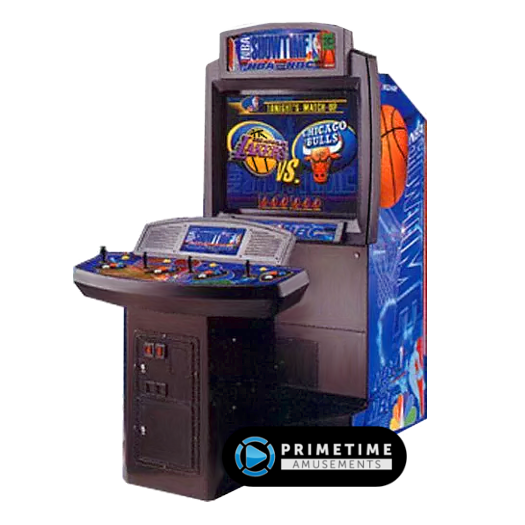 This proven winner is one of the most realistic NBA arcade games ever, following in the footsteps of popular titles like NBA JAM. All of the league’s players from the 1999 roster as well as the then-current arenas are recreated in stunning texture mapped 3-D. Featuring hundreds of unique dunks, animations, highlights, instant replay and halftime stats, create-a-player option, secret moves and players, real fouls and freethrows and so much more!

This 39″ showcase cabinet allows 4 players to compete with more elbow room than the standard arcade unit. It was also produced as a conversion kit, sharing the same hardware as NFL Blitz 2000. Conversion kits were also developed for models that featured both Blitz and NBA Showtime on the same board!

This game has been discontinued and available used equipment varies wildly.

– Fully licensed and featured updated roster lists for the 1999 season

– Support for 1-4 players at the same time

– Introduced “Create-A-Player” mode to build your own NBA star

– Tons of slam dunk animations, player moves and even secrets!

– Midway’s NBA Showtime:NBA on NBC is no longer in production. Please call us about availability. All used models pass through PrimeTime Amusement’s “Certified Pre-Owned” program, which guarantees that the game will be completely refurbished and ready to operate upon arrival. Also ask about our game rentals!