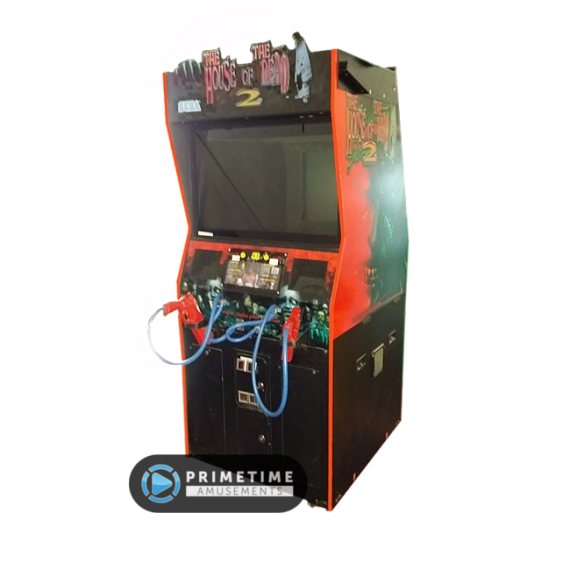 Set two years after the “Dr. Curien Incident” of the first game, AMS agents James Taylor and Gary Stewart come across a new outbreak that is being led by Caleb Goldman of the DBR Corporation. Goldman is expanding on Curien’s horrifying research and it is up to you to stop them. For one or two players, take your trusty six shot pistol and battle all varieties of undead terrors across six stages. Replay value is enhanced by the presence of many new hidden pathways, allowing players to experience something new with every play!

REFURBISHED STOCK: 6/17/21! – A House of the Dead 2 unit is currently available from a PrimeTime operated location in Florida. Each will go through our Certified Pre-Owned refurbishing program before shipping to you. Please call for pricing and lead time.

Sega’s House of the Dead 2 Features:

– Score judgement is shown between stages

– Sega’s The House of the Dead 2 is no longer in production, having been released in 1998. Please call us about availability. All used models pass through PrimeTime Amusement’s “Certified Pre-Owned” program, which guarantees that the game will be completely refurbished and ready to operate upon arrival. Also ask about our game rentals!