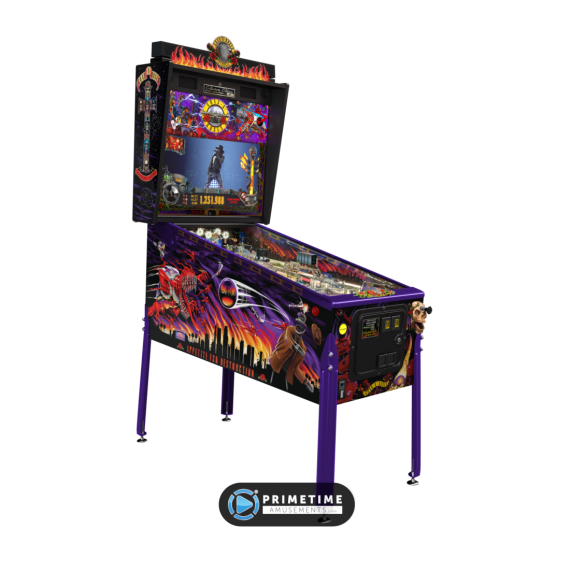 Guns N’ Roses: Not In This Lifetime [Collector’s Edition]

It’s the ultimate gift for the ultimate fan of the “most dangerous band in the world” – This is Jersey Jack Pinball’s Guns N’ Roses: Not In This Lifetime Collector’s Edition.

In this title, you go on a high-energy world tour, taking the band’s act to the far reaches of the globe, enjoying Guns N’ Roses’ greatest hits along the way. The machine is available in three unique models, with this listing representing the Collector’s Edition [LE] of the game. Similar to the Limited Edition, this model is the complete package that will please and GNR fan.

The Collector’s Edition comes in a distinctive cabinet that sports it’s own art package, enhanced with the sculpted roses around the action button as well as and a skull and rose molded shooter-housing sculpture. It also uses Jersey Jack’s special high quality  mirrored Radcal artwork, sparkle paint and this also comes with a topper and sideblade art. Production is very limited on this one: Only 500 units will be made. It also comes with 4 flippers instead of 3; Red brick powder coat metal frame; Individually numbered and limited to 5000 units; 150 additional RGB LEDs over the Standard (300 total); Gibson Headstock upper playfield with 6 ball lock; Triple-kinetic diverter fender bass head mini playfield (found in the stage area, upper left); Triple path 4-String bass ramp wireform; & 2 Full motion articulating RGB LED stage spotlights

– Features the most complete and art package of the three models, with sculpted fixtures on the outside, a topper, mirrored “Radcal” art and side blades

– Also available in a Standard Edition or Collector’s Edition