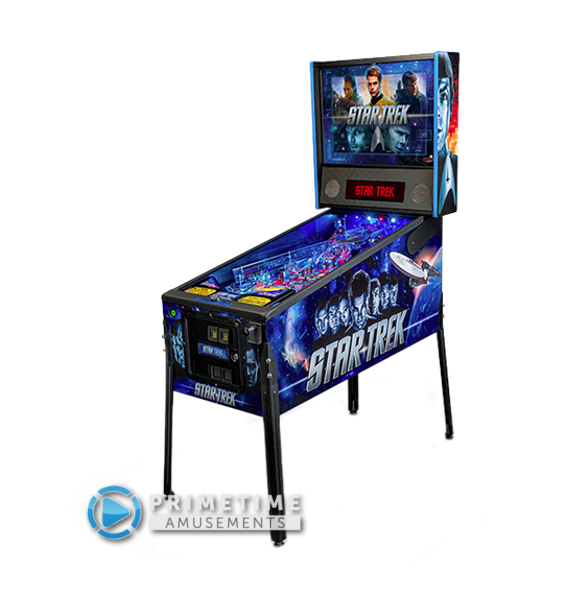 Star Trek is back in arcades and better than ever with Steve Ritchie’s Star Trek pinball designs. Based upon the “reboot” Star Trek films, Star Trek (2009) and Star Trek: Into Darkness (2013), players will experience an action-packed pinball adventure that will have them coming back time and time again!

At the beginning of each game, players chose their mission by pressing either flipper button on the side of the machine. Missions include: Prime Directive; Space Jump; Save The Enterprise; Nero; Destroy The Drill; and Klingon Battle. Win Bronze, Silver and Gold medal while you complete the missions to go for The Captain’s Chair where big points are in store!

– Large and detailed USS Vengeance toy hovers over the playfield. Watch out as it can shoot back!

– Redesigned backbox for a sleek look

– Stern’s Star Trek Pinball is no longer in production, having been released in 2013. Please call us about availability, but note that we infrequently come across pinball machines. All used models pass through PrimeTime Amusement’s “Certified Pre-Owned” program, which guarantees that the game will be completely refurbished and ready to operate upon arrival.