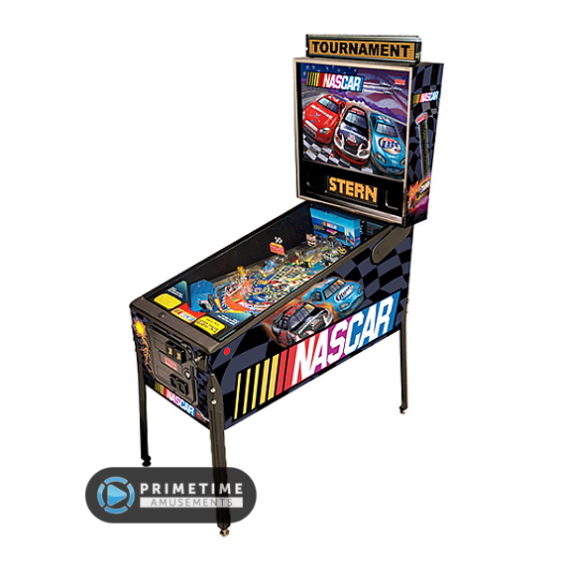 Merging the speed of the racetrack with the speed of the silver ball, Stern Pinball, Pat Lawlor, and his team at Pat Lawlor Design, brings out another hit. NASCAR Pinball features the high energy of NASCAR racing along with the fascination of high-tech gaming.

NASCAR Pinball is a blend of high energy NASCAR racing and high-tech gaming. Cars are featured from three race teams that were current when this game first launched – the No. 2 Miller Lite Dodge driven by Rusty Wallace of Penske Racing South; the No. 29 GM Goodwrench Chevrolet driven by Kevin Harvick of Richard Childress Racing; and the No. 21 Motorcraft Ford driven by Ricky Rudd of Wood Brothers Racing. A primary component of NASCAR Pinball is the racetrack that encompasses the entire playing surface. Energized by magnets, the loop sends pinballs racing around like stock cars racing around a track! NASCAR Pinball also features a truck hauler that the player can launch a ball through along with a test toy car that the player can bang with the pinball. Other features of the game include a voice over from Allen Bestwick, NASCAR television analyst for NBC, and recording artist Sammy Hagar’s “I Can’t Drive 55”.

A limited edition model of this game feature Dale Earnhardt Jr. was released in 2007.

– An alternate backglass without the Miller Lite logo was produced but we cannot guarantee availability of this glass either way since it is not longer made.

– Stern’s NASCAR Pinball is no longer in production, having been released in 2005. Please call us about availability. All used models pass through PrimeTime Amusement’s “Certified Pre-Owned” program, which guarantees that the game will be completely refurbished and ready to operate upon arrival. Also ask about our game rentals!

Looking For Other NASCAR Themed Games?