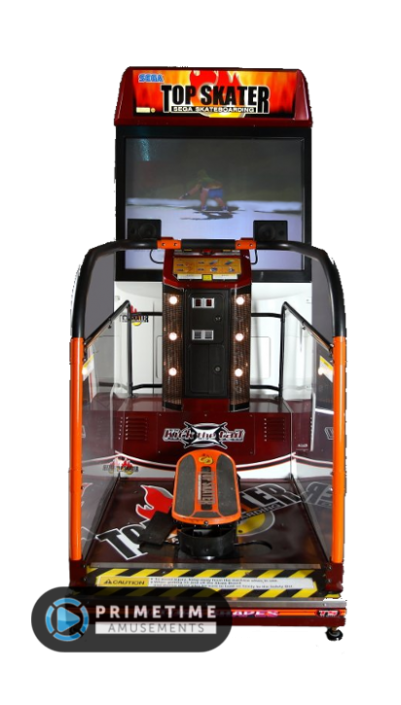 This was the challenge asked by the innovative skateboard simulator game developed and released by Sega in 1997. As the first game to feature an actual skateboard platform controller, players could hit the streets with full body racing action! Perform those fantastically difficult moves like the pros, without breaking any of your appendages.

As a physically interactive game, players use their entire body to maneuver through ultra-challenging skateboarding courses, specially crafted to put each player to the test while rewarding them for achieving the best tricks. Successfully performing tricks will earn you points while jumping through rings on the course will give you extra time. When a course is finished, the more time you have means you’ll earn even more points!

Further enhancing the experience, choose from six unique characters with their own individual style and personality. Top Skater includes all the hard-core skateboard moves: kick flips, 180-degree turns, 360 flips, indy nose bones, Oilies and more! To complete the “feel” of this being a real simulator, they even incorporated real corporate sponsor billboards into the game!

– Exclusive to arcades, made more exclusive with the unique skateboard controller

– Collect rings for extra time and perform tricks for points

– The original shipped with a 50″ projection monitor; ask about upgrading to a sleek new HD LCD!

– Sega’s Top Skater is no longer produced, having been released in 1997. Please call us about availability. All used models pass through PrimeTime Amusement’s “Certified Pre-Owned” program, which guarantees that the game will be completely refurbished and ready to operate upon arrival.