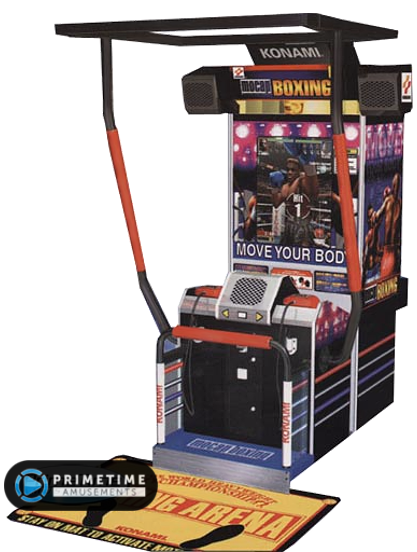 Well before the Nintendo Wii and Microsoft Kinect brought motion gaming home, the arcade was the place to find such innovative technologies. With Konami’s Mocap Boxing, you can feel like you are actually in the ring!

Mocap Boxing simulates realistic pro boxing fights thanks to the body motion capture system built into the game cabinet. Players have to bob and weave their bodies through fights, avoiding your opponents punches while throwing your own using the attached boxing glove controllers. The goal is just like in pro boxing – knock your opponent out before the round is over while avoiding being knocked out yourself. To help newcomers, the game features prompts as to prime spots to hit on your opponent along with effective combos. Each player gets three KOs as lives; get knocked out 3 times and it is game over.

Note that the tagline on this game of ‘Move Your Body’ isn’t a suggestion if you want to do well at it – you have to be willing to move around the sensor ringand not slouch if you want to win. As a bonus the game also tracks how many calories you burn, making it a true “exer-game”.

– Exclusive to arcades – pioneering body motion capture years before it was available at home.

– Six bouts to play through; secret button pushes at the beginning can allow you to also fight the ref or ring girl!

– Players & opponents have energy gauges; when 0 is hit, it’s a knockout. Build up your Punch Gauge to be able to land a single KO blow!

– 3D graphics are displayed on a vertically mounted, medium resolution CRT screen; ask about out conversions to LCD!

– Konami’s Mocap Boxing is no longer produced, having been released in 2001. Please call us about availability. All used models pass through PrimeTime Amusement’s “Certified Pre-Owned” program, which guarantees that the game will be completely refurbished and ready to operate upon arrival.