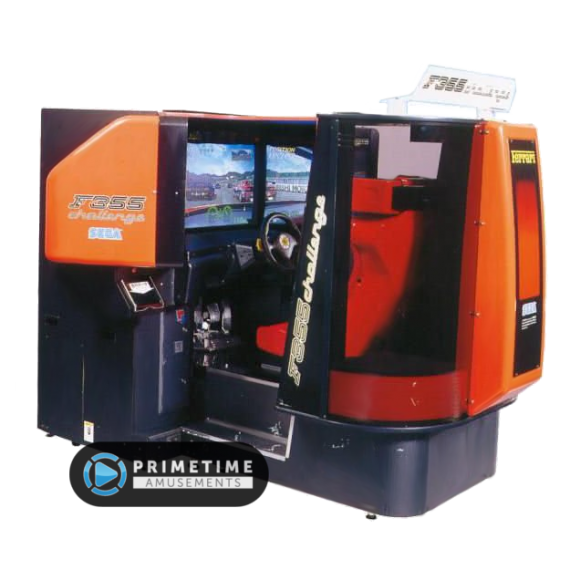 Imagine owning a Ferrari that you’d let the kids drive! That is what Sega’s F355 Challenge Theater Model offers, sporting a large sit-down cabinet and 3 monitors for a true simulator style experience.

Ferrari F355 Challenge was designed by legendary game designer Yu Suzuki (Hang-On, OutRun and many other titles) along with input from actual Ferrari engineers and professional drivers. This expertise worked to  duplicate the thrilling sensations that are only found in one of the world’s most sophisticated race cars, the Ferrari F355!

Choose from six of the world’s most well known race tracks including Long Beach, Suzuka and Monza! Amazing graphics are displayed over a 170-degree field of vision plus the one-of-a-kind Ferrari sound blazing through the sound system featuring an in-the-seat mounted sub woofer!

– No other game recreates the feel of getting into a Ferrari like this!

– Capable of linking up to eight (8) units for a multiplayer simulator extravaganza!

– Also produced in a standard sit down Twin model.

– Sega’s F355 Challenge is no longer in production, having been released in 1999. Please call us about availability. All used models pass through PrimeTime Amusement’s “Certified Pre-Owned” program, which guarantees that the game will be completely refurbished and ready to operate upon arrival. Also ask about our game rentals!

Want to see the F355 Challenge Theater in person? You can find it at the PrimeTime Arcade inside the X-Treme Action Park in Ft. Lauderdale, FL!