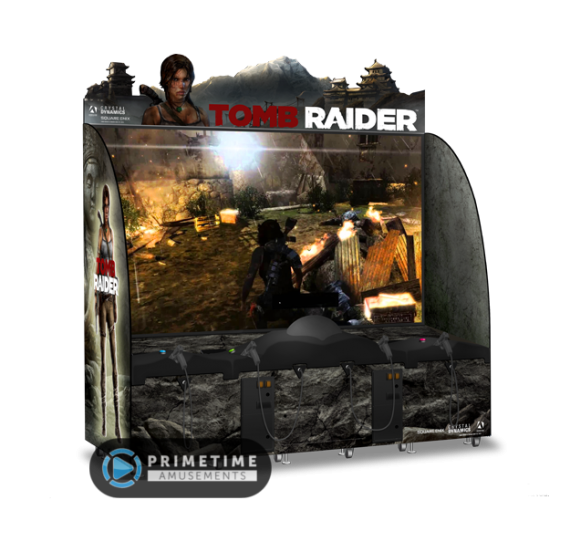 The courageous Lara Croft finally finds her way to arcades with Tomb Raider, a multiplayer arcade game by Adrenaline Amusements.

Based upon the Square Enix console game of the same name that was released in 2013, this arcade title has been heavily adapted from that to create a new and unique arcade experience. First, the cabinet might look familiar as it uses the same design as found with Adrenaline’s Rabbids Hollywood title – it sports a 120″ HD screen and with this space offers action for 1-4 players at a time. The pistol weapons feature incredible tracking ability and players reload by pulling back on the top of the gun, almost like the real thing.

For the software, the story recounts the tale of when Lara is stranded on an island full of rabid animals and hostile soldiers. You must help her and her companions escape the treacherous situation, collecting relics and other treasures along the way. The game features 3 exciting chapters (each broken into various acts), providing for plenty of satisfying action. With the four player design, users also get to compete against their friends, seeing at the end of each act how they did in terms of score, accuracy and relics collected.

Operators may order their edition now, with units shipping in early May.

– A fresh Tomb Raider experience that has been completely reworked from the console edition, providing for arcade exclusive fun

– Officially licensed by Crystal Dynamics & Square Enix; benefit from a license recognized around the world

– Tomb Raider recognition has been refreshed thanks to the recent film.

– Supports 1-4 players at the same time

– Treasures to collect, contributing to your score