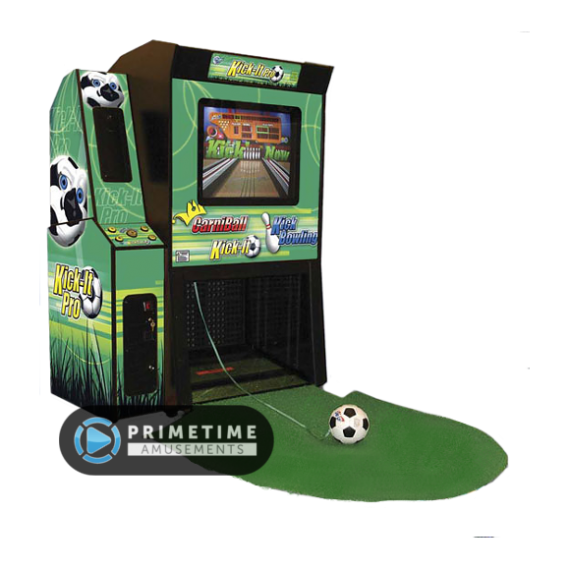 Kick-It Pro by GlobalVR brings soccer to life at the arcade!

Improved and enhanced from the “Jr.” version that had been released earlier, players kick a real soccer ball attached to a tether into the patented sensor net. This new measures the speed and direction of the ball, translating it into action on the screen! Kick-It Pro features a large 33″ SVGA monitor and a high-end Intel based Voodoo Graphics enhanced CPU that powers the three built-in games to this soccer simulator experience. those three titles are: Kick-It (attempt to score goals against a defending goalie, penalty shot style); Carniball (hit the carnival style moving targets) and Kick Bowling (self-explanatory). Up to four players can join in the fun, playing for the high score or for tickets!

What Makes The Kick-It Pro Special?

– Controlled via tethered soccer ball that is kicked into the net

– Patented net sensors measure the velocity and direction of the ball, translating that to virtual action

– Also produced in the Kick-It Jr. model by Interactive Light

– GlobalVR’s Kick-It Pro is no longer in production, having been released in 2006. Please call us about availability. All used models pass through PrimeTime Amusement’s “Certified Pre-Owned” program, which guarantees that the game will be completely refurbished and ready to operate upon arrival. Also ask about our game rentals!