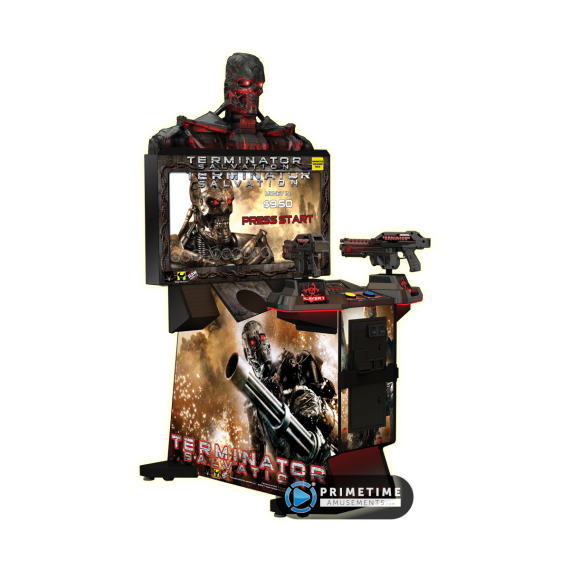 Play Mechanix shows off their prowess again with their 2010 arcade shooter, Terminator Salvation Arcade. This is based on the movie of the same name in the legendary Terminator Sci-Fi franchise, pitting the player against hordes of sentient robots who are intent one wiping humanity out. This listing is for the “Fixed Gun” design of the game, which is available in two styles: 32″ monitor & 42″ monitor builds.

Every Terminator Salvation Arcade stands out with a striking cabinet design. Fixed gun models have the controls attached to the game and use standard pivot bases (with a potentiometer on X & Y movement) for aiming. This also means that operators don’t need to worry about the guns being dropped on the floor. Each gun uses a “Pulse Rifle” style design that was also used on Play Mechanix’s Aliens Extermination & Aliens Armageddon 42″ models. The guns feature solenoid-powered force feedback, and maintain the unique “Reload Clip” feature (with the yellow button on the front of the gun) found on the front of the weapon. Few games capture that ‘macho’ feeling like Terminator Salvation does!

The game features four levels of play where you first are saving human survivors from the onslaught of the self-aware machines. Boss battles play out in epic fashion, as you need to quickly shoot the targets before you get hit. Then, you’ll take the fight to the enemy as you seek to destroy Skynet’s HQ. Have a friend join in to make the task a little easier and more exciting!

This was also produced in a standard 32″ model; fixed guns 42″ model and Super Deluxe 80″ model. This video shows the 42″ Deluxe version.

– One of the best selling and best earning arcade titles of the early 2010’s!

– Each model sports a 720p HD screen, graphics powered by a Dell PC

– Supports 1-2 players; players are given rankings at the end of each level

– Expert Mode can be selected by the player for a deeper challenge!

– Raw Thrills’ Terminator Salvation is no longer produced, having been released in 2010. Please call us about availability. All used models pass through PrimeTime Amusement’s “Certified Pre-Owned” program, which guarantees that the game will be completely refurbished and ready to operate upon arrival.

Want to see Terminator Salvation in person? You can find it at the PrimeTime Arcade inside the X-Treme Action Park in Ft. Lauderdale, FL!