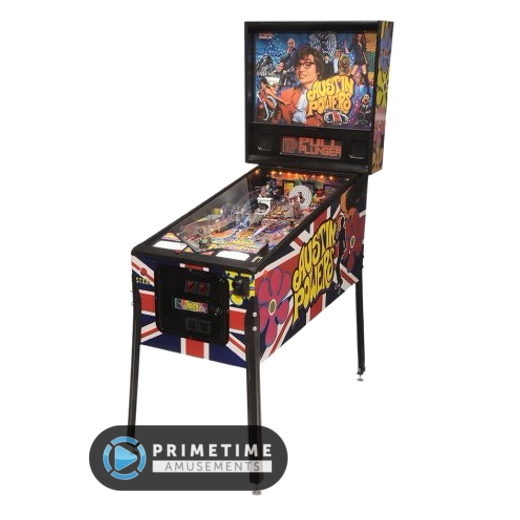 The irreverent hilarity from the Austin Power movies are now here for pinball, thanks to the wizards at Stern!

Join the world’s most comedelic spy as he battles the forces of evil while looking for a romping good time. This pinball machine has it all: a spinning Mini-Me, an Austin that boogies, Dr. Evil’s hidden lair, a time machine, and a frickin’ laser beam that shoots real pinballs! Your favorite characters even say their most groovy lines, while Austin’s theme music, “Soul Bossa Nova,” keeps you movin’ to the silver ball. It’s groovy baby!

The game gets down with three multiball modes: MOJO, Fat Bastard and Time Machine multiball. Hit the appropriate targets four times to active each for swingin’ action.

– Based upon the comedy hit of the same name

– Enjoy artwork, toys and soundbytes from your favorite characters in the movies!

– Two flippers to control the action as you aim for a variety of targets, four ramps and the aforementioned multiball modes!

– Family or Adult Mode selectable by the operator

– Stern’s Austin Powers pinball is no longer in production, having been released in 2001. Please call us about availability. All used models pass through PrimeTime Amusement’s “Certified Pre-Owned” program, which guarantees that the game will be completely refurbished and ready to operate upon arrival. Also ask about our game rentals!