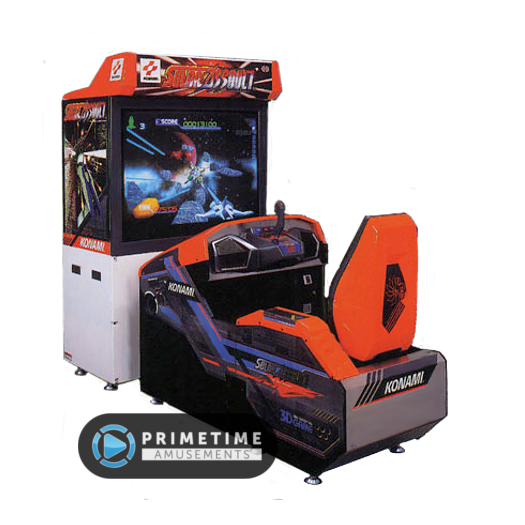 PLEASE CALL FOR PRICING AND AVAILABILITY

Enter into the deep space world of Solar Assault, where thrilling action and adventure awaits!

As a part of the popular Gradius series, Solar Assault brought the franchise into 3D. Chose from the BP-592A Vic Viper, the LS-379G Lord British or the WC-672H Alpina as you take the fight to villainous aliens. Solar Assault plays similar to games like Star Fox in that you see the action from behind your spaceship. Using a modified version of the Gradius power-up system, players can select Auto or Manual configuration, the latter allowing a user to design exactly how they want their power-ups to work.

This model is for the Deluxe version of the game, which uses a 50″ projection screen. A standard sit-down 29″ CRT version was also produced.

– Arcade exclusive title that was never released on consoles

– Similar in style to Nintendo’s Star Fox but based upon Konami’s popular shoot ’em up series, Gradius

– 3D interstellar shooting action with 3 ships to choose from.

– Powered by a specific PowerPC design that also worked for GTI Club.

– 3D graphics are displayed on a 50″ projection screen. Ask about our conversions to a modern LCD!

– Konami’s Solar Assault is no longer produced, having been released in 1997. Please call us about availability. All used models pass through PrimeTime Amusement’s “Certified Pre-Owned” program, which guarantees that the game will be completely refurbished and ready to operate upon arrival.