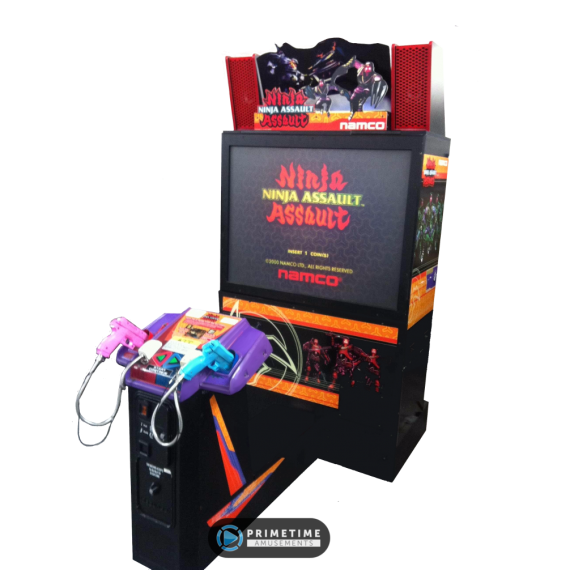 Ninja Assault is a 1-2 player light-gun game produced by Namco with an atmosphere that blends Japanese Classical history together with fantasy.

The story puts the player through nine challenging stages as they face down various fierce bosses and attempt to rescue the beautiful Princess Koto before the evil warlord uncovers the secret to the Mach Gun. Enemies have their own vitality. Life bars above their heads indicate how much “life” is left in their battered bones. Players can renew their own life by finding and snatching “first aid crosses” hidden within boxes and other objects throughout stages. There are also hidden ways to increase your score.

– Support for 1-2 players, each using their own kick-back pistol.

– Namco’s Ninja Assault is no longer produced, having been released in 2000. Please call us about availability. All used models pass through PrimeTime Amusement’s “Certified Pre-Owned” program, which guarantees that the game will be completely refurbished and ready to operate upon arrival.