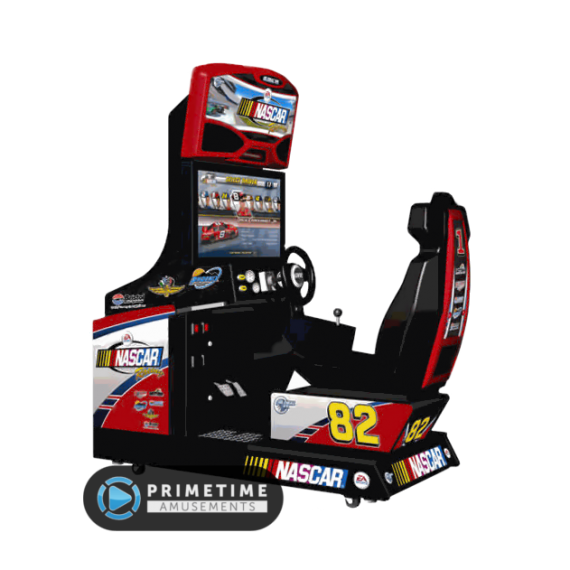 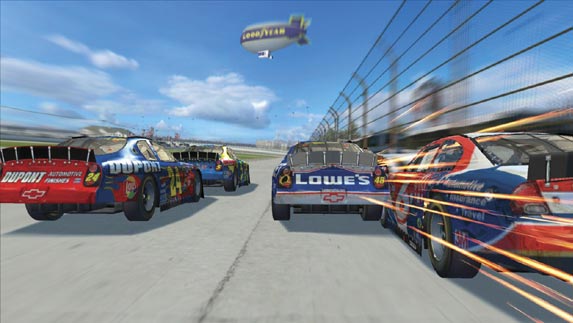 REFURBISHED STOCK: 8/5/20! – A limited number of NASCAR Standard units are currently available from a PrimeTime operated location in Florida. Each will go through our Certified Pre-Owned refurbishing program before shipping to you. Please call for pricing and lead time.

– Exclusive to arcades. Never released to any home console device
– Officially licensed NASCAR product
– Race on six official NASCAR tracks including a night track
– Standard version features a 32″ HD LCD display
– Powered by a standard PC using an nVidia 7600 series graphics card
– Standard racing controls includes a force feedback steering wheel, gas & brake pedals, and a 4-speed shifter
– Six speaker audio system plus a button to change the tune during the race
– Link up to 10 units for a multiplayer attraction (ver 1.1 software)
– Also produced in 42″ Deluxe and 57″ Motion Deluxe cabinets; upgrade kits to switch over to NASCAR Team Racing were produced in 2010.
– This title is no longer produced by GlobalVR, having been released in 2007. Please call us about availability. All used models pass through PrimeTime Amusement’s “Certified Pre-Owned” program, which guarantees that the game will be completely refurbished and ready to operate upon arrival.

Want to see EA Sports NASCAR in person? You can find it at the PrimeTime Arcade inside the X-Treme Action Park in Ft. Lauderdale, FL!