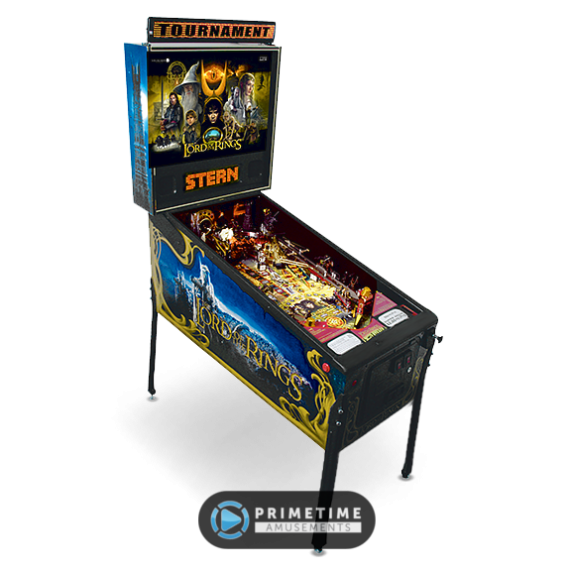 The greatest adventure of all time is now STERN Pinball’s epic pinball machine for all ages – The Lord of the Rings.

The Lord of The Rings pinball machine features many exciting elements from New Line Cinema’s box office hits, The Fellowship Of The Ring, The Two Towers, and the climatic The Return Of The King. Your goal on each play is to collect the Elf Rings, the Dwarf Rings, and the mortal men rings, thereby forming The One Ring. Then face the ultimate challenge as you must destroy The One Ring through collecting all three movies on the board.

This is where you will find non-stop action at its best in the form of the following mechanisms: A Balrog toy that pivots when hit by the ball, revealing the jump ramp that leads to The One Ring. * A magnet in the center of The One Ring which pulls the ball in and then feeds another ramp shaped in the form of Aragorn’s legendary Narsil sword; * Four multi-ball modes, including one for each movie, as well as for Gollum; * The Orthanc and Barad-dur Towers. Players can knock down Barad-dur, which also features the eye of Sauron; * A small playfield in the upper left hand corner represents that of The Paths of the Dead; * Twelve action figures from Play Along toys interspersed throughout the playfield. The pinball features original speech from Elijah Wood (Frodo), as well as John Rhys-Davies (Gimli the Dwarf). With all of these features, it is no wonder why this is one of the best rated pinball machines of all time!

Stern Pinball’s The Lord Of The Rings Features:

– Based on the popular Tolkien series of the same name, particularly the Peter Jackson made film trilogy.

– Collect the rings of power on your quest to destroy The One Ring in the fires of Mt. Doom.

– Features a molded Balrog bash toy that moves; Two Towers including one you can destroy; The One Ring with a magnet to pull the ball through causing it to “disappear” for a moment; a sword shaped ramp.

– Twelve action figures from Play Along toys interspersed throughout the playfield.

– Two flippers control the action as you shoot for the different targets and ramps as you collect items to advance. This game is jam packed with game collectibles to keep you coming back for more.

– Powered by a modified Stern Whitestar game board

– Stern’s The Lord Of The Rings Pinball is no longer in production, having been released in 2007. Please call us about availability. All used models pass through PrimeTime Amusement’s “Certified Pre-Owned” program, which guarantees that the game will be completely refurbished and ready to operate upon arrival.