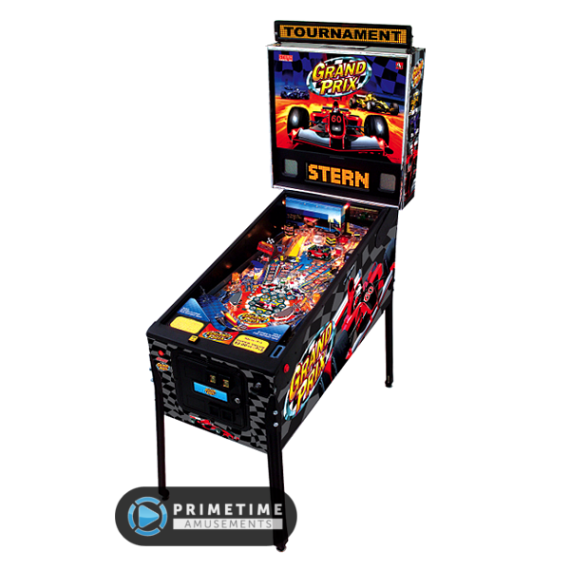 Grand Prix racing is an immensely popular sport in Europe and around the world today, and Stern’s GRAND PRIX pinball lives up to all the high-energy expectations of its fans.

GRAND PRIX is a perfect piece for operators and homeowners who like real excitement in their pinball. Designed by Pat Lawlor (The Addams Family, Funhouse and many others), the main feature of GRAND PRIX is a loop that runs around the entire playfield. Energized by magnets, the loop sends pinballs racing around it like cars racing around a track. GRAND PRIX also features a semi-truck hauler that the player can launch a ball through, and a Grand Prix car toy that the player can bang with the pinball. It is similar in design to Stern’s NASCAR pinball, but with modifications for the Grand Prix theme. It was primarily sold outside of the United States, mainly in Europe.

– 3D molded Grand Prix racing car with a “garage” underneath

– Very fast paced game, feel like you are racing!

– NOTE: Stern Pinball limited sales of this to Europe, making this very difficult to come across in North America. NASCAR is essentially the same game.

– Stern’s Grand Prix Pinball is no longer in production, having been released in 2005. Please call us about availability. All used models pass through PrimeTime Amusement’s “Certified Pre-Owned” program, which guarantees that the game will be completely refurbished and ready to operate upon arrival. Also ask about our game rentals!