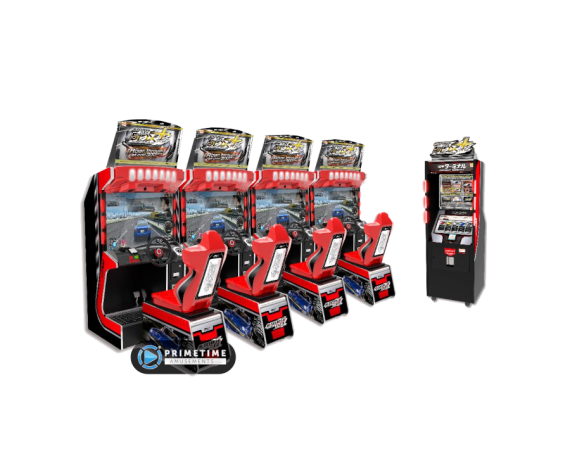 The Wangan Midnight series was first established in 2001 and since then, various sequels have worked to build up one of the most loyal fanbases in arcade gaming. Available in North America since 2017, Maximum Tune 5 has continued that tradition and now those players are being rewarded with the 5DX+ update!

As an arcade racing game, any player will be able to approach the game and know what to do, although the Maximum Tune series prides itself on more realistic driving physics than what you typically encounter among today’s arcade racers. The game does not drive itself for you, but it also doesn’t control exactly like a real race car does either, finding a happy middle. 5DX+ keeps everything that players enjoyed about 5 and adds more – more cars, more tracks, more music and more rewards. Read on for more details.

Maximum Tune also shines with its content. While most competitors only offer a few tracks and nothing more, here there are four primary game modes to enjoy: Story; Online Ghost Battles, Versus and Time Attack. 4 new courses have been added to the game in 5DX+ to expand locations where players can race. All vehicles are available in each mode; New vehicles for 5DX+ include a couple of cars from both Lamborghini and Acura, while the roster has added 20 more cars for existing car manufacturers in the game! This brings the total of new vehicles to 24.

Story Mode offers 60 character driven episodes, where players must beat the rival to the finish line. Stories of different characters are told through text and art, but the main appeal is that this is where players gain points to tune and enhance their vehicle. Points can be spent on horsepower or handling in the quest to max out your build, which is also useful for obtaining the best results in the other modes.

Online Ghost Battles allow you to race against recorded “ghosts” of other players from all over North America. Because this game requires an online connection to operate ($75 per seat fee applies), all Maximum Tune machines are on the network. This will also state the name of the location and where it is at. Competition in the ghost battles earn players Dress-Up Points, which are spent on new parts for modding your car. In 5DX+, a huge number of new parts are available!

This mode also includes some sub-modes: Crown Battles and Japan Challenge. Crown Battles pit the best players at a location against each other in a “King of the Hill” style mode across 11 tracks. Japan Challenge pits you against ghosts created in Japan; Beat Japanese players all across the country to unlock new license plates and car skins! In 5DX+ the number of times you can clear this mode to win new parts has increased to 10.

Versus Mode is straight-forward – when another player is playing and has set their game to “Accept VS.,” players can race against each other.

Last but not least is Time Attack. This is a Namco racing classic, where you are driving the courses without other vehicles or rivals, just seeing how you do against the clock. Courses on this mode are significantly longer than story mode, thus operators can charge more coins per play.

Maximum Tune 5DX+ is available in an upgrade kit form for existing MT5 cabinets, or can be purchased as a full dedicated cabinet. It is available in 2-seat and 4-seat configurations; Note that both configurations also come with the online-enabled Wangan Terminal. Players can purchase a BANAPASSPORT card directly from the terminal or the Maximum Tune 5DX+ game cabinet to save their in-game progress. Use the card at the Wangan Terminal to modify car appearance, dress-up parts, strength aura, stats and create or modify teams.

That doesn’t even cover everything in the game – it also features classes, stickers, titles, trophies and such to incentivize repeat play. No other game can bring players back like Maximum Tune can!

Here is the updated model as seen at IAAPA 2021. Video is available in 4K Ultra HD resolution. Subscribe to us on YouTube to be alerted of additional video updates!

Note: The “Wangan Midnight” part of the license was removed for the North American release; otherwise the game is the same as “vanilla” MT5DX+.  Cards from WMMT3DX or WMMT4 will not function in MT5, but MT5 cards will work with 5DX+. These units must be connected to the internet to function and you must purchase a complete set (2 or 4 MT5 racing units + Wangan Terminal kiosk). Quantities are limited. Please give us a call if you have any questions or concerns.

– Exclusive to arcades – no worry in your investment having to compete with a cheap home console version
– Major content update to the 5th installment of the popular technical racing series
– Multiple game modes rewards players with plenty to play and explore
– Pick from a wide selection of officially licensed vehicles, including 24 new cars!
– “Tune” each car with better parts to improve its performance. This incentivizes repeat play!
– Each vehicle has a maximum horsepower (HP) potential of 830HP, which is achieved by completing the story mode. Please refer to tuning options here.
– Wide array of vehicle customization options through the included Maximum Tune terminal.
– Each machine records your races to create a “Ghost” record – race against your own ghost to improve times
– Online-required game allows you to track stats, use your player account from any machine or battle a ghost rival in a different location!
– Red & black themed cabinet features a 42″ HD display, bright yellow LED lighting and a six-position manual shifter
– Control your car with a high-quality, force feedback steering wheel, gas/brake pedal
– Enjoy the high-quality soundtrack that includes songs from previous Maximum Tune entries. 5DX+ features new songs!
– Online tournaments hosted by Bandai Namco on a regular basis to draw players back!
– Coin or card swipe compatible

– UPGRADE KITS AVAILABLE – Call for pricing and details. Note that these kits will NOT allow you to convert a different racing game to Maximum Tune; You MUST have an existing Maximum Tune 5 unit for it to work. Kits are sold for 2 and 4 player models.

NOTE: This game requires an always-online connection. There is a $75 per seat charge for access to the network.

Looking for a Maximum Tune 5 set near you? Check out Bandai Namco’s MT5 location finder!