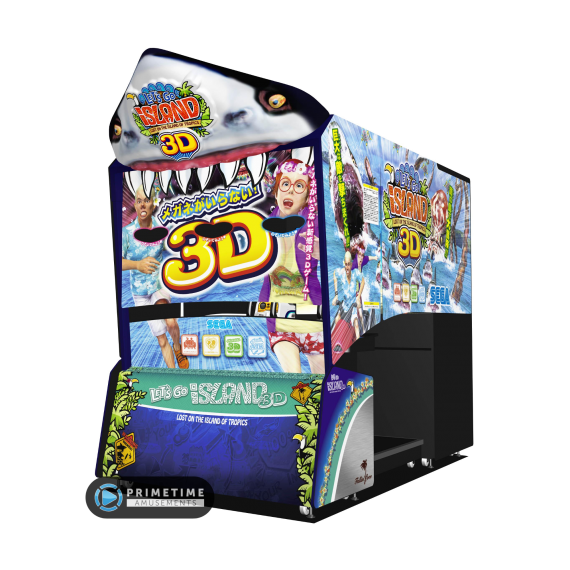 The follow up to the number one Sega action adventure Lets Go Jungle has gone high-tech with glasses-free 3D on a big screen in Let’s Go Island 3D.

Following a similar pattern in gameplay to what was found with Let’s Go Jungle, the sequel takes the adventure to a tropical island paradise where a tourist and her guide get mixed up with sea pirates and angry mutant creatures. Let’s Go Island features the same levels, enemies, bosses and 2-player challenges as the non-3D versions but it includes a new theater cabinet design.

The 3D in the title denotes cutting edge 3DTV technology so you do not need to worry about wearing or replacing 3D glasses. Watch in amazement as the island comes to life right before your eyes , popping with depth on the large 55″ HD display. In the event that 3D isn’t your thing, switch it off at the press of a button on the control panel.

– Switch between 2D/3D at the touch of a button

– Surround sound system further immerses the player into the game

– Multiple stages to play through with colorful graphics and intense enemies

– Sega’s Let’s Go Island is no longer produced, having been released in 2011. Please call us about availability. All used models pass through PrimeTime Amusement’s “Certified Pre-Owned” program, which guarantees that the game will be completely refurbished and ready to operate upon arrival.