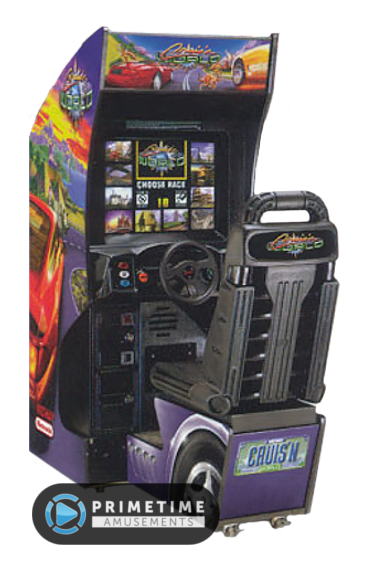 Cruis’n World by Midway Games is a sequel to the classic Cruis’n USA. This takes everything that made USA fun and makes it better!

Also designed by legendary arcade game creators Eugene Jarvis and Larry DeMar, this driving title continued with the ‘open circuit’ style that Cruis’n USA pioneered. Now, instead of tracks just found in the United States, become a world traveler as you enjoy the challenge provided by 14 different tracks (up four from Cruis’n USA) across 12 countries!  Find the best shortcuts on each track to become the 1st place champion.

Cruis’n World also was the first to introduce “tricks” into the series. With skill based timing and control, you can pull off wheelies, jumps & flips! The game also has a ‘rival’ car indicator so you know who you really need to beat!

Just like its predecessor, this game includes three different view buttons, a Radio button to change the music when you want and a 4-position gear shifter with manual or automatic controls selectable by the player.

– Developed in partnership with Nintendo

– Link four (4) units together for that proper arcade multiplayer experience

– Midway’s Cruis’n World is no longer produced, having been released in 1996. Please call us about availability. All used models pass through PrimeTime Amusement’s “Certified Pre-Owned” program, which guarantees that the game will be completely refurbished and ready to operate upon arrival.

Other Cruis’n Units that may be available:

Check out Cruis’n World in action: