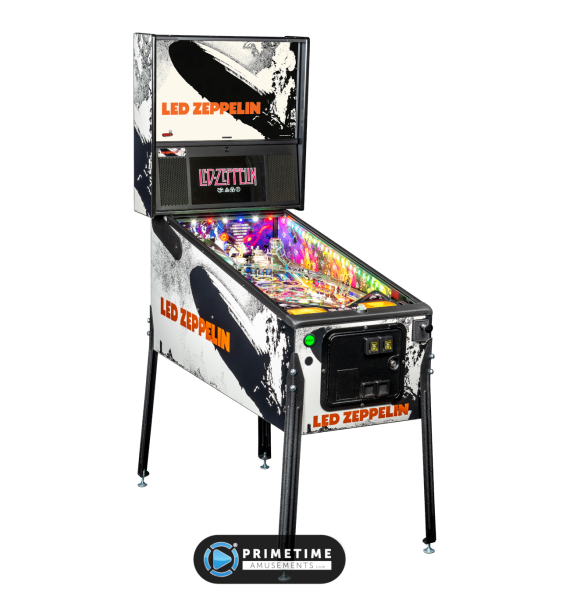 Iconic rock bands and pinball have long mixed well together, and now The King of Pinball (Steve Ritchie) has crafted a new experience that captures the energy of the iconic English band, Led Zeppelin. This listing is for the Premium model.

Led Zeppelin got their start back in 1968, and went on to become one of the most influential bands to grace the musical landscape. For the game itself, it recreates the high energy rock ‘n roll concert experience, fusing pinball and music together.  Players are transported back to Led Zeppelin’s early days and tour the world from 1968-1980. As if players were members of the band playing its music, their play updates game features at the start of each verse and chorus of the 10 included, selectable songs. Those are: Good Times Bad Times; Whole Lotta Love; The Song Remains the Same; Rock and Roll ; Trampled Under Foot; Ramble On; Kashmir; Immigrant Song; Black Dog and Communication Breakdown (as a note, it currently does not include Stairway To Heaven, although Stern can add things like songs down the road through software updates). Each game also comes with a software controlled 10-band equalizer for greater sound control, and uses LED lighting to highlight songs that they have completed.

Premium models come with artwork based upon the band’s 1st album, there are 3 flippers, 3 pop-bumpers, 2 eject pockets, a Song list on the back panel with progress lighting, 3 main multiballs (between 2-6 balls in action at once), 4 steel ramps, a Hermit stand-up target, and 2 molded toys (1 a zeppelin and the other the iconic Icarus figurine), an electric gate and more.

These models are more detailed than the Pro, coming with more RGB LEDs (including Stern’s new Expression Lighting System) to create the ultimate concert experience. They also include a new interactive mechanic called Electric Magic. This device rises up from the playfield to become a physical spinner, magnetic physical ball lock and ball capture, adding more depth to game features. Premium/LEs also come with an additional reversing scoop and metal combo ramp, providing for more action that fans will love.

Better than talking about these features, see them in action from this manufacturer produced video!

– Based upon the iconic, Hall of Fame rock band of the same name

– Premium cabinet artwork based upon the band’s 1st album

– 3 flippers, 4 ramps, plenty of targets to hit and a deep rule set that’s great for beginners and serious players alike

– Choose your song at the beginning of each play; 10 hits to pick from; Tune your audio using the built-in software equalizer

– New backbox LED dimming feature to reduce glare on the playfield. Operator adjustable, this will only do so during an active game

– Also available in a Pro model

Stern has produced a number of accessories for this game, which will ship out separately from the game itself. Check them out in this trailer, but note that certain accessories already come installed on the Premium or LE models: