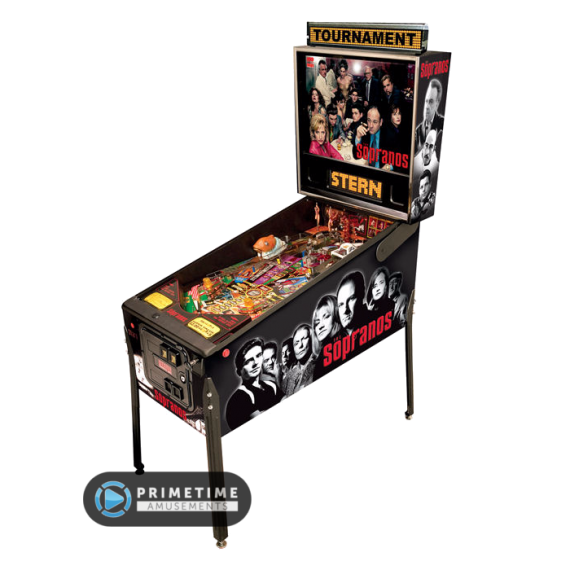 The Sopranos pinball offers would be ‘wise guys’ a dynamic and interactive experience into the world of the critically acclaimed and award-winning HBO hit television series The Sopranos.

This is a perfect game for all of those who have been spellbound by mobster-themed movies and television shows throughout the years. Featuring Tony Soprano, his immediate family and business “family”, The Sopranos pinball machine challenges the player to rise through the ranks to become the Boss. The game features various iconic elements from the show, including the dancing girls of the Bada Bing!; Tony Soprano’s boat, The Stugots, with a classic multi-ball feature; a safe that cracks open after being whacked by the ball; and the talking fish from Season Two that always jokes around with the player.

– Based on the hit TV show, The Sopranos by HBO

– As the TV Show is intended for mature audiences, so is the pinball machine

– Featuring artwork representing the Sopranos family along with voice work pulled from the show by the various actors.

– Interactive & static molded toys include: a pair of scantily clad pole dancers of the Bada Bing Club; the wise cracking fish; the Safe that operates as a bash target; a big rig truck and The Stugots, Tony Soprano’s boat

– Two flippers, two ramps, three pop-bumpers, a spinner and many targets to aim for

– Stern’s The Sopranos Pinball is no longer in production, having been released in 2005. Please call us about availability. All used models pass through PrimeTime Amusement’s “Certified Pre-Owned” program, which guarantees that the game will be completely refurbished and ready to operate upon arrival.