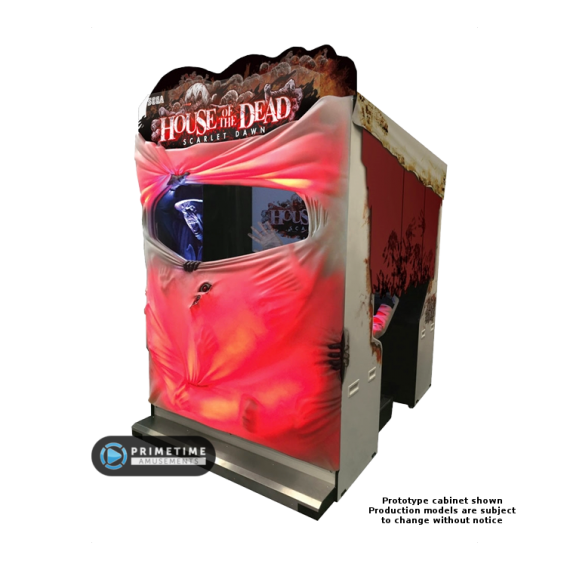 House Of The Dead Scarlet Dawn

Are you prepared to experience true terror? If so, you’ll find it with Sega Amusements’ House Of The Dead Scarlet Dawn, a sequel in the long-running zombie shooting series that began in the 1990s.

Within the House Of The Dead ‘universe’, the Scarlet Dawn story takes place after the events of the 4th game but years prior to the 3rd. Players take on the role of AMS agents Ryan Taylor & Kate Green as they must survive another onslaught of zombie hordes. Armed with  a trusty submachine gun, players will face the largest zombie crowds in franchise history, confronting old favorites as well as new threats. Rescue those in need, choose your path when the selection is available and take down terrifying bosses.

When users experience the refreshed world of House Of The Dead, they will do so with more realism than ever seen in the series. The graphics are powered by Unreal Engine 4, providing for extremely detailed enemies and environments. The exquisitely detailed environmental cabinet design helps block out some of the outside world to help users focus more on the game, which is further enhanced by air-powered force feedback features. Feel the wind bursts simulated by helicopter blades spinning overhead or the breath of the zombies.

See this game in action from the IAAPA 2018 event. Video available in 4K UHD; subscribe to us on YouTube to stay up-to-date with the latest product videos!

NOTE: Demand for this game is already coming in strong, with initial shipments already called for. Pre-orders are already open so don’t wait, call in and get a spot today! General production units should begin shipping in November/December 2018…Early 2019 for those who wait too long!

– Already in high demand from FECs!

– External sensors detect when someone passes by to flash red LED lights inside of the translucent fixture. Guaranteed to startle users and draw more attention to the game!

– Controllers feature a secondary trigger and a switch for changing weapons; use a new vibration mechanism for force feedback

– Memorable boss fights at the end of each stage

– Various operator adjustments for tuning the game beyond pricing & volume

– Ships with a standard coin door; compatible with a DBA and/or card swipe system

Looking for other House Of The Dead Games? We might have an older title available though our Certified Pre-Owned Games program!

Click Here for The House Of The Dead (Deluxe)

Check out our House Of The Dead Announcement video posted to YouTube from 2018!