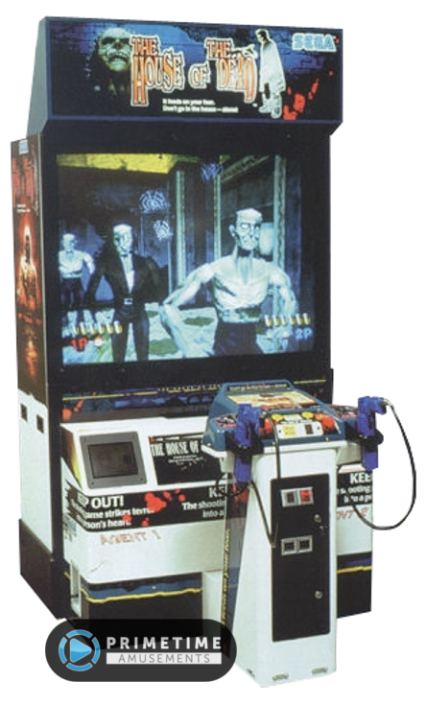 House of the Dead, The (Deluxe)

This is the series that started it all, bringing undead blasting to arcades like never before. The House of the Dead is a terrifying and exciting shooting game in which you gun down living corpses in a house of terror.

You are a special investigator sent to rescue a captured research worker, but in the course of your ordeal you’ll learn the secrets of the House whether you want to or not… What will be the fate of the researcher and his fiancée Sophia? Survive and you’ll find out!

The House of the Dead was designed to provide amazing replay value to arcade floors. The game features an interactive storyline, changing zombie positions & rooms each time you play, hidden objects, hostages to rescue and a pistol that holds six shots each (shoot off screen to reload). With such attention to detail, it’s no wonder that this went on to spawn various sequels.

This listing is for the Deluxe model, which features a 45″ projection monitor.

REFURBISHED STOCK: 6/17/21! – A House of the Dead unit is currently available from a PrimeTime operated location in Florida. Each will go through our Certified Pre-Owned refurbishing program before shipping to you. Please call for pricing and lead time.

Sega’s The House of the Dead Features:

– Zombies can be blown apart piece-by-piece

– Many secrets to uncover

– Supports 1-2 players, use pistol guns to take down enemies, shoot off-screen to reload

– Sega’s The House The Dead is no longer produced, having been released in 1997. Please call us about availability. All used models pass through PrimeTime Amusement’s “Certified Pre-Owned” program, which guarantees that the game will be completely refurbished and ready to operate upon arrival.

Check out The House of the Dead in action: