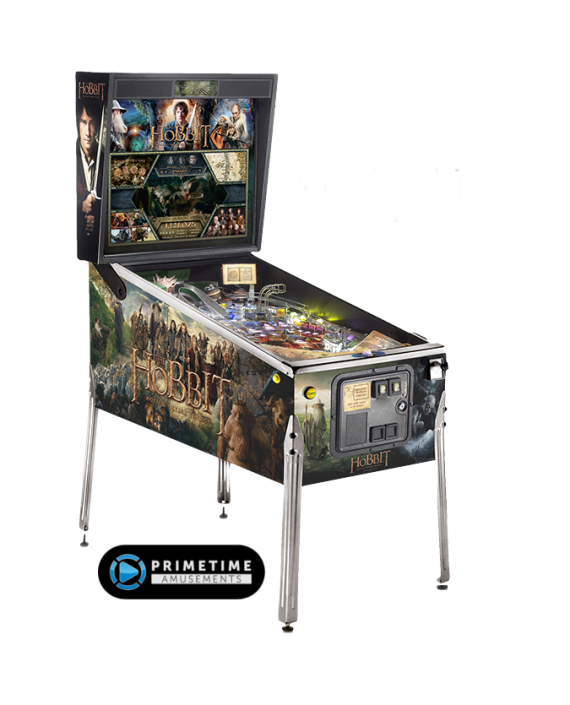 Join Bilbo Baggins on his quest with the Dwarves in this action-packed pinball machine from Jersey Jack Pinball.

The Hobbit Pinball is based upon the acclaimed Peter Jackson film trilogy and is based in the popular fantasy universe created by J.R.R. Tolkien. You join the valiant Dwarves on their quest to reclaim their home from the evil dragon Smaug, which includes recovering the Arkenstone.

The Hobbit Pinball playfield is decorated with an incredible artwork package, four (4) pop-up Goblin targets that will rise from the playfield at certain times, two ramps, an interactive Smaug toy among the pile of gold, D-W-A-R-F drop targets, a 27″ HD LCD screen in the back box, a small LCD “book” on the playfield, pop bumpers, three flippers and more to make this pinball quest one for the ages.

The Standard version of the game has certain features as optional purchases, which includes Invisiglass and a shaker motor. Please call about pricing.

– Interactive Smaug The Dragon toy with moving head and mouth

– Small LCD on the playfield displays mode information. There are 31 game modes total!

– Jersey Jack’s The Hobbit Pinball is no longer in production, having been released in 2016. Please call us about availability, but note that we infrequently come across pinball machines. All used models pass through PrimeTime Amusement’s “Certified Pre-Owned” program, which guarantees that the game will be completely refurbished and ready to operate upon arrival.