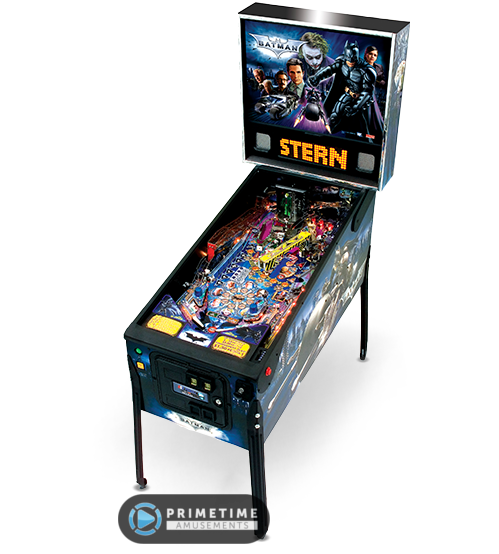 Designed by George Gomez and Lyman Sheats, this 2008 release was directly influenced by the Christoper Nolan directed Batman Begins and The Dark Knight films.  Batman pinball offers many exciting features, including: The Joker’s Reveal Mechanism, a mechanical cylinder that rotates to reveal and fight a taunting Joker; Scarecrow’s Crane, a mechanical crane featuring a spring-attach pinball which the player can strike with the pinball; the Batmobile Bridge, a teeter totter mechanism that races a pinball against a Hot Wheels® Batmobile; an upper mini-playfield; and lots of multi-ball action.

– Features fun interactive toys including a molded Joker, Scarecrow & his crane, the Batmobile and Batman himself

– Complete the four missions to progress to higher score modes such as Locate The Joker, Rescue Rachel and more

– Check out the more recent release of Batman 66, which features a similar layout with some new features and classic Batman TV characters such as Adam West and Burt Ward.

– Stern’s BATMAN is no longer produced, having been released in 2008. Please call us about availability. All used models pass through PrimeTime Amusement’s “Certified Pre-Owned” program, which guarantees that the game will be completely refurbished and ready to operate upon arrival.