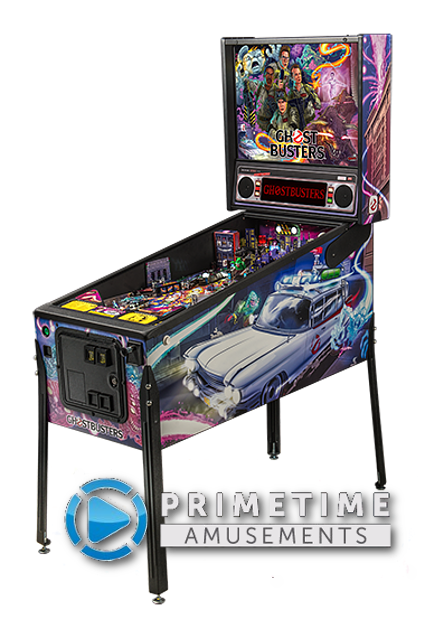 Few franchises stand out quite like the classic Ghostbusters. The witty blend of humor and horror captivated audiences in the 1980s and the originals still hold up today. Now, Stern Pinball has taken this iconic license and given us a great pinball machine to enjoy!

There are three different versions of Stern Pinball’s Ghostbusters. Each game is based on the first two movies, featuring hand-drawn artwork by “Zombie Yeti”, likenesses of the original actors and plenty of voiceovers that keep players coming back for more. All models also feature Stern’s new SPIKE electronics system for improved reliability and maintenance.

To read up on what makes each model different, click here for the Ghostbusters Pinball Features Matrix.

– Based on the original beloved Ghostbusters films; Has nothing to do with the modern remakes

– Custom speech recorded just for this game by actor Ernie Hudson, aka “Winston Zeddemore” from the films

– Red LED based DMD backbox display for scoring and animations

– Trivia from the movies is shown during the attract mode

– Stern’s Ghostbuters Pinball is no longer in production, having been released in 2015. Please call us about availability, but note that we infrequently come across pinball machines. All used models pass through PrimeTime Amusement’s “Certified Pre-Owned” program, which guarantees that the game will be completely refurbished and ready to operate upon arrival.

Or if you are looking for the Ghostbusters video redemption arcade game, we’ve got that too!

New to pinball? check out our basic scoring tips video: