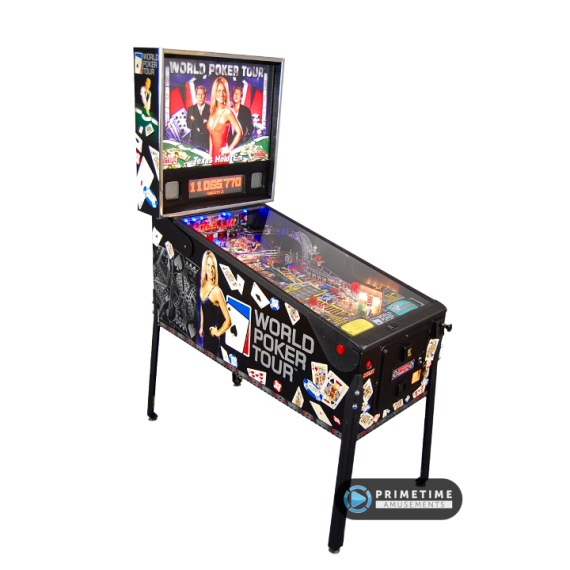 World Poker Tour pinball brings new levels of excitement and challenge to the arcade for both the novice and the skilled player.

Just like the real thing, you travel from city to city playing Texas Hold ‘Em until you reach the World Poker Tour final table. A dot matrix display is located in the center of the playfield, showing players their Hole cards, as well as the Flop, Turn, and River cards. The player gets the Flop, Turn and River cards successively by making ramp shots located on the left and right sides of the playfield. World Poker Tour pinball also features 5 Card Stud, where the player needs to hit cards on sixteen drop targets to get all the poker hands, such as two of a kind, three of a kind, etc. all the way up to the elusive Royal Flush. World Poker Tour pinball also offers a second level playfield, and a “mousetrap” ball lock for exciting Multiball play.

– Features the voices and images of the television show’s colorful commentators, Vince Van Patten and Mike Sexton, and the show host Courtney Friel.

– First Stern title to be powered by their SAM hardware system

– Tournament Mode kit was sold as an option

– Stern’s World Poker Tour Pinball is no longer in production, having been released in 2006. Please call us about availability. All used models pass through PrimeTime Amusement’s “Certified Pre-Owned” program, which guarantees that the game will be completely refurbished and ready to operate upon arrival.