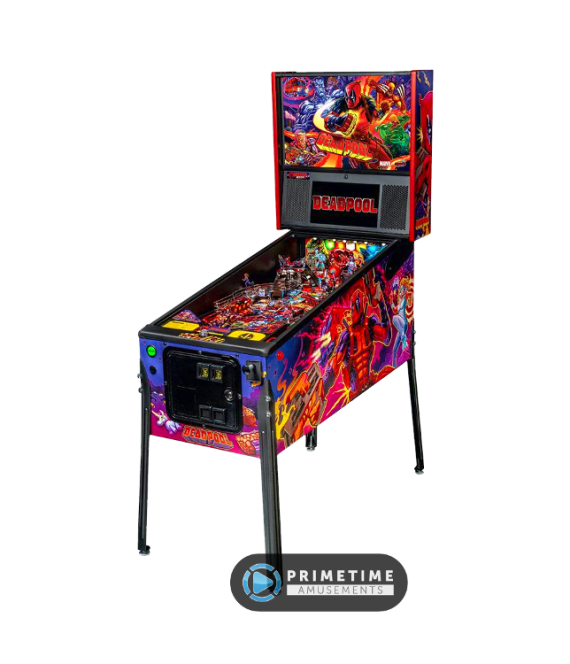 Become the “Merc With A Mouth” on this 4th-wall-breaking pinball adventure – it’s Deadpool by Marvel and Stern Pinball!

Each Deadpool pinball table takes the user on an immersive journey through the offbeat and hilarious Deadpool universe. You’ll team up with iconic X-Men characters such as Wolverine, Dazzler, Domino, and Colossus as they battle against infamous villains Juggernaut, Sabretooth, Mystique, Sauron, and Mr. Sinister. Players will also tag along with Deadpool on his time machine quests as he battles against the ferocious T-Rex and the brutal Megalodon.

This is all brought to life thanks to the vibrant and distinctive hand-drawn art by renowned illustrator Zombie Yeti. Well known actor Nolan North (Nathan Drake in the popular Uncharted video game series) stars as the eccentric voice of Deadpool. Each game features a 3-bank drop target with a ball lock that’s guarding a custom molded Lil’ Deadpool bash toy target. In addition, all models include two stainless steel and wireform ramps with a striking Katana Sword ramp return. Deadpool pinball entertains with an amazing array of ninjas, vampires, and chimichangas, making it suitable for all skill levels.

Check out Deadpool Pro in action from our look at it from two different trade shows. Video available in 4K UHD; subscribe to us on YouTube to stay up-to-date with the latest product videos!

– Irreverent, 4th-wall-breaking fun with the iconic “Merc With The Mouth”

– Original soundtrack composed just for this game; buyers can download the 11 tracks for free!

– Several characters represented on the playfield on flat plastics, including Deadpool in a swinging hammock