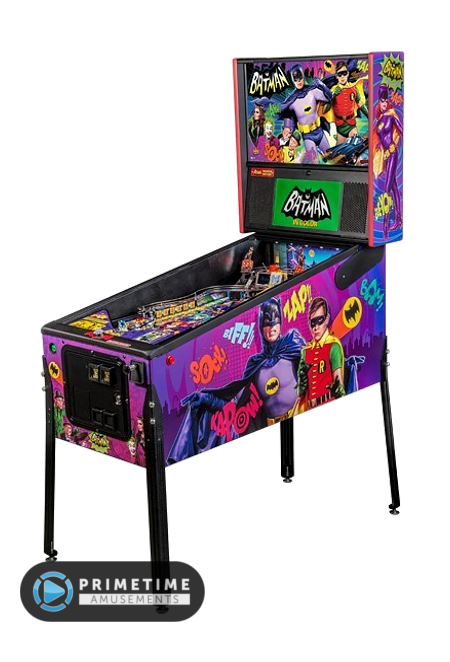 BOFF! KAPOW! WHACK! It was campy and it was cheesy but the Batman TV show from the 1960s provided viewers with endless hours of entertainment since it debuted in 1966. In celebrating 50 years since the show aired, Stern Pinball has developed the Batman 66 pinball machine so that you can not just watch the show, you can play it!

Batman 66 was designed by George Gomez (Attack From Mars, Monster Bash, The Lord of the Rings & more) and is similar in some ways to Stern’s Batman pinball release from 2008 but with enough differences to stand out. This is Stern Pinball’s first release to replace the monochrome-colored dot matrix displays with a full color LCD display. This allows for clips from the TV show to be played in HD glory along with new animations. There is also a classic TV set toy (Villain Vision) that spins around on the playfield to show the player messages from different villains.

This entry is for the Premium version. Stern did not develop a “Pro” model for Batman ’66 – it was only produced in Premium, Limited Edition and Super Limited Edition models. This game also features 20 stand up targets, 3 pop-bumpers, a magnet, Bat phone toy, Batmobile toy, 2 ramps and 2 flippers. For a full look at the many features as well as the differences between the three versions, click here for the Batman 66 Features Matrix.

– Also made in Limited Edition and Super Limited Edition models. Please note that quantities on those models are very limited. If interested, please ask about availability.